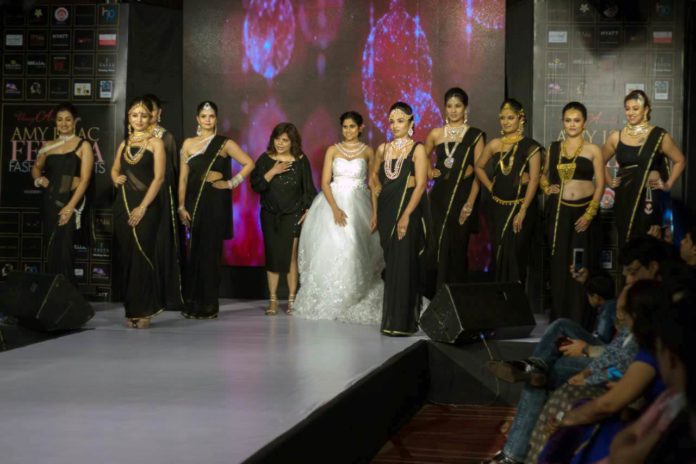 Sai Tamhankar is a talented actress in B Town who is known for hot and glamorous avatar. She has made headlines for many reasons and in the recent past have been reported a lot in the media for her upcoming films and her charity work as well, which she is doing a lot. Now, if you look at her she is back in the headlines and this time she has caught her attention with her hot and glamorous avatar at the walking of the ramp show for the Femina Fashion Night. She was seen donning with her off shoulder white outfit, which is being designed by the known designer called Sheetal Biyani. Saie looked damn hot like an angel straight out of her fairytale in this dress or ensemble.

Amidst all when she has been glittering high in the M Town and the media, she was surrounded by the press and the media to get her reaction on this. She was seen sharing her experiences as well when she said that it was great experience and exposure while she was seen moving over the ramp. She said that it was her first ramp walk and was having a bit of nervous but was more excited about it. She then said that she felt like any princess in her white off-shoulder white gown.

Well, now talking about her movies, Sai Tamhankar seems to be often grabbing attention about her fans and their attention. All thanks to experimenting and playing with different cool and hot looks, but, this time for sure she has managed to steal the hearts of the millions of her fans with her white gown. So, what do you have to say about this hot look in the white off-shoulder outfit that made her look both cool and hot. How about commenting about her dress and her new avatar seen over the Femina Fashion Night and stay tuned with us to know the latest in M Town, her and others.