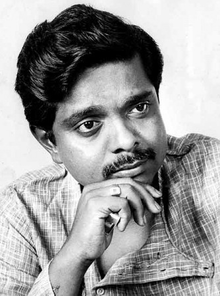 Sadashiv Amrapurkar hailed from Ahmednagar, Maharashtra. The actor was active in his school stage dramas and had a notable stage presence. He joined the Marathi theatre group in Pune soon after the completion of his studies. His association with the theatre was largely successful for he acted and directed more than fifty plays and soon ventured into Marathi films. The actor had a keen eye for human dynamics and characters around him. He was also adept at the art of mimicking and comedy. His career in film s began with the national award winning film 22 June 1897. The film was based on the assassination of the General Rand on the same date as the film’s title. Sadashiv played the role of Lokmanya Tilak in the movie with an exemplary ease and simplicity. He was noticed for his talent at powerful expression of the character. Many offers followed from the Marathi industry and he went on to establish himself as a versatile actor.

In the year 1983, he stepped into Hindi cinema with the Govind Nihlani’s award winning film Ardh Satya. In this landmark film that is ranked the best cop film he acted alongside the doyens such as Om Puri, Smita Patil and Naseerudin Shah. He played the role of Rama Singh, the negative character. He won the Filmfare Best Supporting actor award that year for the role. In 1988 came Kaal Chakra which gave him another grey role to make an impact with.

He gave another exemplary performance in Sadak (9991) which was a blockbuster in its time. Sanjay Dutt and Pooja Bhatt played the lead pair in the action flick in which Sadashiv played a eunuch who is a wicked owner of a brothel. His acting was par excellence and it is considered to be a study in villainous roles for film courses. The actor essayed the difficult role that was sexually complicated and emotionally deceitful. He received the film fare award for best actor in a negative role.

Sadashiv was impressive in many roles that followed later. In Gupta (1997), he played the clever cop. Sadashiv ‘s talent transcended genres and roles. He was equally good at making his audiences laugh as he could scare them. In the later part of his career he discovered himself in comic role in films like Aunty no 1 and Coolie Number 1 with Govinda. His role of the haughty father of Juhi Chawla in Ishq is also memorable.

Sadashiv passed away on 3 November 2014 due to lung infection in Mumbai. He left behind a legacy of valuable contribution to Hindi cinema.