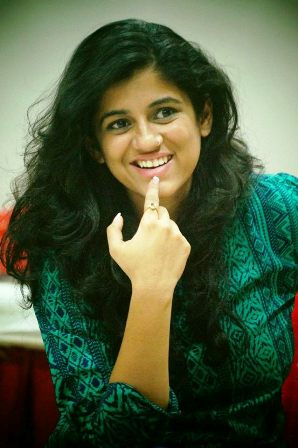 Rucha Apte is a Marathi TV actress who was born and brought up at Pune. She did her schooling and college from Pune itself. During her school and college days, she used to be active in social and cultural activities that made her enter into the domain of acting. She remained active in theatres before she decided to move to Mumbai for her full time career in acting. Once she completed her graduation, sShe then headed to Mumbai as she knew this city is the Mecca of creative industry. With a bit of struggle, she was able to enter into the Marathi TV show getting the TV show called Bun Maska wherein she played the character of Ash in the show that was aired at Marathi Youth Channel called Zee Yuva.

This gave her a big break in Marathi TV industry and was applauded for her role and performance alike. Before she got this TV show, she also did one more TV serial called Dil Dosti Duniyadari playing the character of Supriya in it that was aired in Zee Marathi. She did the supporting role wherein she played the character of the lead role (Sujay)’s younger sister and she had crush on Kaivalya. Besides, the TV shows, she has an interest in plays and she was seen playing the character in Dalan.

Considering her decent performances, she also got the chance to enter into the M Town and so far she has done two movies. Her first movie in M Town includes Maza Algaar wherein she played the supporting role and the film was released in the year 2017. Her next movie was Idak, which will be releasing soon in this year in 2018. Now, talking about her personal life, she is not dating anyone and has no plans to enter into anyone’s life as she is currently focusing in her career. Stay tuned to know more about her and others only with us and do let us know what do you feel about the lady by commenting below.

Previous इंस्टाग्राम वर श्रध्दा कपूर बनली नंबर वन
Next Roll No. 18 Marathi Movie Review : A Blend of All the spices but ended up making it too salty to digest