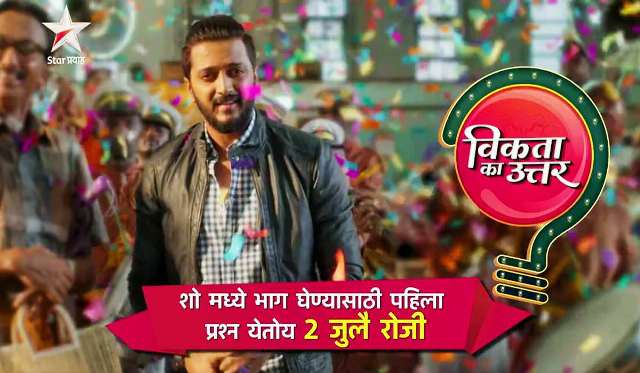 Ritiesh Deshmukh could not be more impressed by the concept of Vikta Ka Uttar, the game show that will be aired soon on Marathi television. After a high in Bollywood, now Ritiesh made a successful production venture in Marathi cinema with Lai Bhari. He is continuing with the same streak of success with his new production flicks. Whereas it is the first time we will be seeing Ritiesh as a host and anchor.

Ritiesh ‘s Vikta Ka Uttar is the adaptation of Malayalam TV show Sell me the Answer which was very popular on Asianet channel. Now the novel concept is all set to keep the audience glued to Star Pravah Marathi channel.

Ritiesh played a mock scene with the media during his press conference. The format of the show was enacted by Ritiesh and the media personals.

Vikta Ka Uttar is a quiz show with very general questions. A contest who is playing has to answer the question correctly in order to win the prize money. If he does not know the answer he has to ‘purchase’ the answer from the traders who are present among the audience. Thus the audience can also play and win money.  Ritiesh said, “ I am completely sold to the concept of the show.’

Family Katta , releasing on October7, is a comedy drama