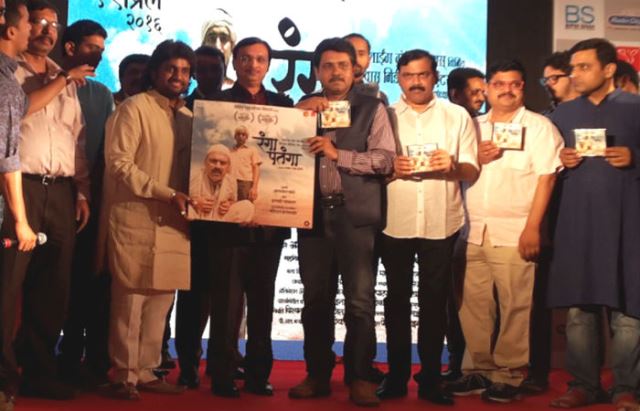 Amol Gole was the name popular in M Town for cinematography category, however, he will be now known as a producer with his upcoming film Ranga Patangaa, which is directed by Prasad Namjoshi. The upcoming film of the duo witnessed a grand music launch, which was presented by Bipin Shah in Mumbai today. At this juncture, the filmmaker also released the first look poster of Ranga Patangaa apart from releasing the two songs of the movie.

The event witnessed Amol Gole in an ecstatic mood as he was pleased to launch the music along with the poster of his debut film. He also spoke about his experience for being the part of the recently helped Pune International Film Festival for his upcoming film being its part as well. In fact, he was also applauded for his efforts winning the best film and best director award for Ranga Patangaa at the festival.

The film comprises of an interesting saga of a poor farmer called Jumman played by Makarand Anaspure who comes out for the hunt of two missing bulls called Ranga and Patangaa, which makes the title of the film. The film has actors like artistes Nandita Dhuri, Umesh Jagtap & Bharat Ganeshpure in the lead roles who all are the popular TV actors. The film is releasing soon as the makers are still to decide upon the date of release.