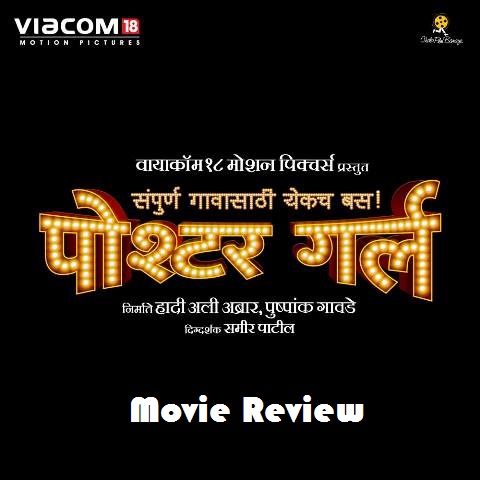 This week the Marathi Cinema had one release, which came in the form of the much hyped film called Poshter Girl. The film is directed by Sameer Patil, while it is produced by Hadi Ali Abrar and Pushpank Gawade under the banner of Via Com 18 Motion Pictures in association with Chalo Film Banaye. The film has Sonalee, Aniket Vishwasrao, Jitendra Joshi, and Hrishikesh Joshi in the lead roles, while, Siddharth Menon, Akshay Tanksale and Sandeep Pathak in the supporting roles. The film is of comedy genre showcases the issue of improper male and female ration in a village based in Maharashtra. The story comes from Hemant Dhome, while the music has come from Amitraj. Time to dig deep into the film to get the crux of the same as under:

The film is set in a village, which has no place for any girl child. The film is based on a satirical take over female foeticide apart from being the issues of land acquisition and suicide.  The story of the film starts when Rupali played by Sonalee enters the village after a long gap and finds out that there is hardly any girl in the village. She aspires to become an agriculture officer, however, amidst all the dearth of eligible spinsters in the village, she starts getting marriage proposals from eligible bachelors. She then makes them realize their mistake and how she does and what impact she can create on the live of the villagers is interesting to explore.

The director after embarking his initial movie Poshter Boyz has come down with this movie. Unlike his previous film, he has once again embarked with another serious issue of female foeticide, however, this time he has refrained himself from adding melodrama and several hard hitting serious issues. The filmmakers have embarked with satirical routs in order to make their point.  The satires are the best tool for presentation and engage the audience the best, Posther Girl has maintains this norm with catch dialogues, good songs and decent star value that makes the audience come towards the film. On the other side, you can find the social issues being clogged in the film the best.

The lead actors like Jitendra Joshi, Siddharth Menon, Aniket Vishwasrao, Akshay Tanksale and Sandeep Pathak can be called as the heart and soul of the movie wherein Sonalee the central character of the film is delivering the best punch in a very convincing fashion. The antics of Jitendra is seen adding much of the humour in the fim, while Aniket’s character is very much different than the other roles he often has been portraying over the silver screen. Siddharth can be called as the lover boy who remains often drunk and has portrayed things the best. Lastly, don’t forget Sandeep and Akshay have gone overboard but at the same time ended up balancing things the best. The other elements like music, screenplay, and other technical elements went okay, which have added the entertainment value of the film.

The film Poshter Girl maintains a great example the way the story is carried out in a sensible fashion and very much entertaining to catch. You will find humor in it; however, the resultant laughter comes when the stark realities are being realized about the issue that the village is pitted with. Last month we had a couple of below average films, however, Poshter Girl simply stands out in the M Town. It has a subtle message to give to the audience backed by decent performances giving a better rating than the others.