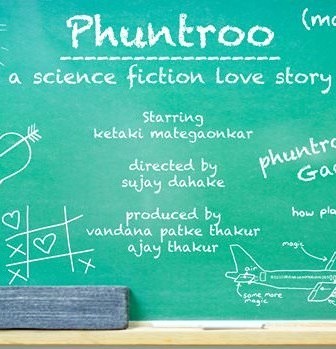 Phuntroo is another Marathi movie that is expected to be released this summer. It is a Sci-Fi film and is anticipated by young audience with great eager. The first look poster has been receiving wonderful reviews and recommendations from the movie goers and is expected to be a big hit. The director of this movie is Sujay Dahake, where Ketaki Mategaonkar is said to have a key role to play as an actor. He was earlier noticed in Shaala, the previous film of Dahake. Phuntroo is considered to be the next directorial venture of Sujay Dahake, after making hit films like Ajoba and Shaala.

It is actually a love store having science fiction backdrop and according to the director is a completely new Marathi film genre. This movie boasts of having a completely different story, which has never been witnessed by Marathi movie fans before. Ketaki Mategoankar after enjoying hits like Shaala, Kaksparsh, Time Pass, Taani and Arohi is quite excited about this venture and to become a part of this epic movie.

Sujay Dahake stated that he not only feels proud of coming up with a movie on a special subject such as this, but also does feel a whole lot of responsibility. He is also extremely confident of the movie’s results due to the effort and hard work that the entire team has put into it. This movie is produced under V. Patke Films’ banner and the producers are Ajay Thakur and Vandana Thakur. After Taani, this is their second venture. Ketaki is said to have played title role in the movie Taani and had won two important Maharashtra State Awards, and is expected to give a better performance in this movie.

This actor rather seems to have become the lucky mascot for Sujay Dahake. Shaala, which both of them together had won Silver Lotus Award at the 59th National Films’ Awards.