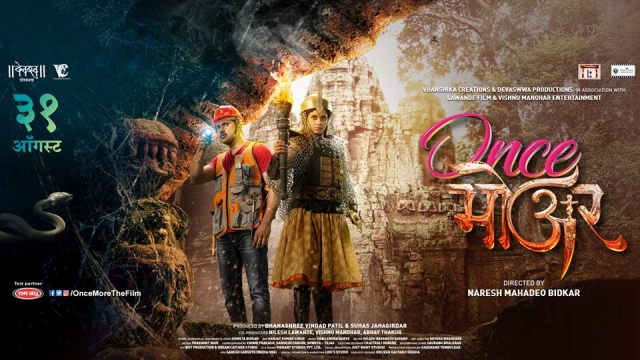 Synopsis: The M Town is often known for a couple of content driven movies, which certainly include the one called Once More. The film is directed by Naresh Bidkar, while it is produced by him along with Vishnu Manohar. Besides, he is also in the lead role as well along with Dhanashree Patil, and Ashutosh Patki. The other actors include the veteran actress from B Town like Rohini Hattangadi, and the comedy king called Bharat Ganeshpure, who would be seen along with Pournima Talwalkar and Naresh Bidkar, who seemed to be playing key roles in this film. The film happens to be a period drama, which is releasing in October 2018, while the choreography has been carried out by Chinni Prakash. The film is produced under the banner called Vanshikka Creations.

The film happens to have too many VFX effects and usage of computer graphics. The movie will therefore would be competing with blockbusters like Baahubali having Chroma background. Thus you will therefore got to see a number of never before seen features, which is making it a never before film to catch. The movie talks about the Karma and it returns to the 14th Centuryera and the present period.

Now, talking about the story of the movie, it is written by the lady called Shweta Bidkar who is famous for ‘Kalay Tasmaye Namaha’ TV serial. As we know the director has several roles to play, he has tried to leave no stone unturned to keep things in a right track. Since this film happens to be a period drama, hence it would be have all the scenes to have the sketches. Thus you need to be prepared for a film, which would come along with loads of sketches for different scenes. One of the interesting feature of the film is that a known professional from hospitality industry called chef Vishnu Manohar would be seen in the movie in a pivotal role, while the choreographer for this film has come from B Town.