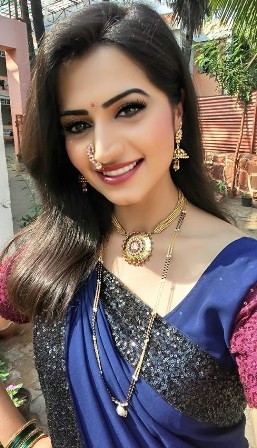 Nupur Parulekar Is not an unknown name in Marathi TV and cinema world. She hails from Mumbai and was born on 21 September, 1988 in the city of dreams. She had her schooling from R.A. Podar College & Canossa Convent High School. Her graduation in commerce came from Ruparel College and for her masters in business admin (MBA) from the prestigious institute called IIPM. She was the topper in IIPM getting her gold medal in her academics. She started her career working as a Digital Marketing Manager for few companies before she finally entered into the world of acting. She is a competent dancer as well apart from an actor of both small and silver screen.

Though she has worked in corporates as digital marketing manager, but her heart always lied in acting and the glamour world compelling her to leave her lucrative job and entering into the domain of acting. It started with the Star Prav TV serial called Ghanteshwar Prasad Ghantawale followed by two TV serials like Buddcha Paul and Arre Vedya Mana. The latter is among the memorable roles in her career. She then headed to enter into the M Town getting the film Pahili Bhet, which helped her to get another called Ek Cutting Chai. She also got another film called My Wife’s Affair, giving a decent exposure over the silver screen. She is focusing in her career and has no one to date in her personal life.