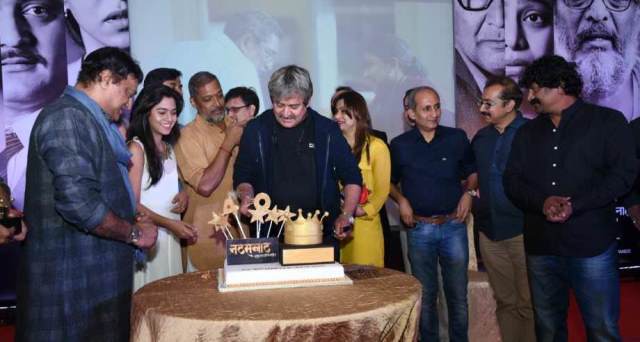 In M Town, the Nana Patekar starrer film called Natsamrat was a big release this year. The film performed big on the box office collecting 40 crore and is still running at different places in Maharashtra. The film has become the highest grocer not just in the year 2016 but in the history of Marathi cinema, the film has been a great grocer of the year. At the juncture of this proud moment, Natsamrat team has organized a great success party wherein a hordes of stars of the film including Nana Patekar, Mrinal Kulkarni, Mahesh Manjrekar, Manasi Naik, Ankush Chaudhary, Vandana Gupte, Samit Kakkad and Adinanth Kothare to name a few.

Amidst all the gala time, the big announcement came in the evening when the director said that the film would be made again in Hindi. This simply created a huge stir in the media and if you believe the buzz, Amitabh Bachchan will be the part of this Hindi remake. At the same juncture, Nana Patekar spoke the press and said it is important that you earn money at the box office but what is more important is the amount of love one gets from the audience. Mahesh Manjrekar then thanked the people for the grand success of the film and called it as an important milestone to his career.