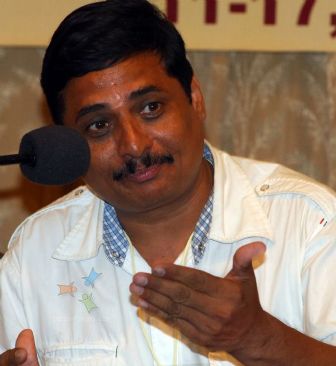 Nandu Madhav is a versatile actor in the Marathi film industry who has essayed many important roles in films like Harishchandrachi Factory, Sankarnama and Shala and recently in Tapaal. He struck gold with his performance in the film Harishchandrachi Factory, which released in 2011. It went on to win many awards in international and national film festivals and was highly appreciated. Nandu Madhav who till then had never played a lead or full fledged role suddenly hogged the limelight and established himself as a prominent figure in Marathi films. In the year 2014, Nandu played another memorable and critically acclaimed role in the film Tapaal which again was widely appreciated by the film fraternity in and outside India. The film won many awards before its release in India this month. The film has won hearts of the audiences and critics alike and has recorded an excellent viewership across the state of Maharashtra.

Nandu Madhav entered films through theatre. Thanks his humble and down to earth personality , the actor has bagged roles which required a simplicity and earthiness. His memorable roles include his character of a 14 year old boy Joshi in the 2012 released Shala . The film received the best feature film award in the state and he actor won lots of appreciation for this performance. He played an important role in the comedy Jana Gana Mana ( 2012) . He has time and again proved that he is equally good at comedy and drama. For its portrayal of the rural background and having education in rural India as its subject, the film was noticed and appreciated by one and all.

In Hindi, Nandu has not got many opportunities to prove his talent. In fact the actor has made himself content with few good roles in films like Jis Desh Mein Ganga Rahta Hain . He was a part of the Amol Palekar directed film Daayra ( The Square circle ) which was based on women and cross gender issues.

Harishchandrachi Factory was a benchmark performance for the Marathi cinema and Nandu Madhav got his due as an actor finally after decades of working in the profession. The film was India’s official entry to the Academy Awards in the foreign language category. It received state level Best feature film awards apart from international awards in various categories. It also won the audience coppice awards in Los Angles. His later film Tapaal seems to be following the suit with the same kind of awards and acclamation.