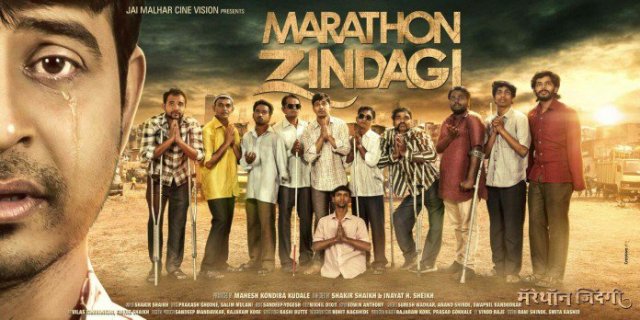 Marathon Zindagi Movie will be releasing soon in theatres across Maharashtra. The story is based on the life and struggle of a handicapped boy. The movie has been made to bring to light the callousness of the government authorities of our country in not encouraging physically handicapped people to stand on their own feet. The movie touches various issues with the help of a protagonist but shows many other show share the same plight. It has been created to depict the political scenario and domination of various groups in certain regions that detain the progress of individuals in our country. Putting the issue of handicapped as the central theme, the movie will be serving as an eye opener to many.

Marathon Zindagi is directed by Shakir Shaikh and Inayat H Shaikh. It is produced by Mahesh Kudale.  The makers have presented a touching tale of perseverance and grit. The trailer of the film is released. There is a love angle too with our handicapped protagonist falling for a lovely girl. Vikram Gokhale returns to films after a short gap.

The handicapped protagonist sets up a shop investing everything in it. It is destroyed in a political chaos and he is left with nothing. The story traces his success in getting back his asset with grit and valor.