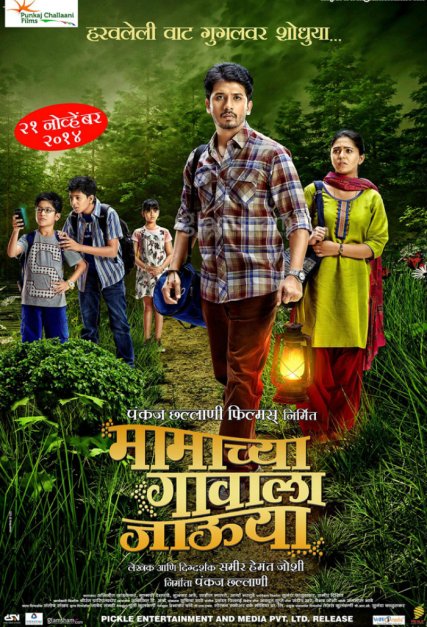 Every family goes to their home village as soon as children’s vacations are on. Going to village is quite a tradition followed all over the country. The Marathi movie mamachya gavala jaaoo yaa is the movie based right on that tradition. In this movie, a family tries to make their way to their maternal uncle’s home at a village. However the real adventure starts when they have to pass through jungle to reach the uncle’s place.

On their way to uncle’s home through jungle, the family does encounter strangers on their path. The film is full of comedy and jungle adventure and is worth watching. The cast of the film includes names like Abhijeet Khandkekar, Shubhankar atre, Arya Bhargude and also Mrunmayee Deshpande.

The film has been made with many connecting points for the audience especially for the Marathi audience. There are scenes where people find themselves getting connected such as things we do when we reach village, living with lack of town facilities and entertainment options and a lot other such.

The film does contain some awesome song tracks under the music composure of Prashant Pillai. The film has been shot at some wonderful nature blessed locations of India. Thus the film covers some beautiful locations all around the country. The major role in this film is of mama who explores the depth of jungles with his way ahead of world with his nephews and niece.

The film already released on 21st of November 2014. While the film does contain a lot of comedy and humorous scenes, there are also some adventurous scenes to keep you hooked. The film is a great example how generation gap is not actually a curse. The young niece and nephew who are techno geeks explore the jungle with experience of their mama to survive on journey.