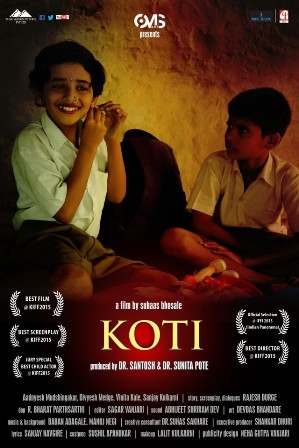 The M Town is not short of good movies these days and Koti is not an exception though. The Marathi film being rich in content seems to have been selected for the film festival has created a decent buzz after being screened at the event leading to win millions of hearts of movie lovers all across the world. Now, the recent was seen being participating in a number of global and national film festivals including the OMS Arts, which is all set to release soon. The film has been directed by the Reti fame director, who has once again embarked with other content rich movie.

The film has managed to win a number of rewards and recognition including at the Indian Film Festival of India (IFFI) bagging top award at the Indian Panorama category apart from getting the special Dadasaheb Phalke International Film Festival Jury award. The film also fetched the Sanskruti Kaladarpan Puraskar Award for Special Attention Film Award besides the one from the Kolhapur Film Festival. The script of the movie has been jotted down by Rajesh Durge, while the Photography has been carried out by Bharat Parthsarthi and the music is given by Manoj Negi and Baban Adgale wherein the film has gained the background music along with the lyrics by Sanjay Navgire.