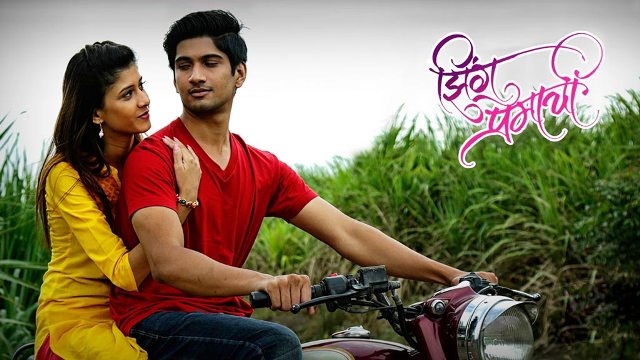 Movie – Jhing Premachi
Director: Shahid Khan
Star cast – Sandesh Gaur, Sheetal Tiwari , Ranjeet Jog , SmitaPawar , Mohaq Kansara , Mrulalini Jabmhle
Writer: Shahid Khan
Genres: Love Story
Producer:  Vijay Kumar Sapkal
ScreenPlay: Shahid Khan
Cinematographer (DOP): Jay Nandan Kumar
Rating – 1.5
Plot
The story is not that unusual one as we see a star basketball player from a village falling in love with a happy go lucky daughter of a local politician. But they realise that their economic divide between their families and it becomes an impediment, which they must overcome. The story goes from the opposition to honor killing but at the end what really goes with it is interesting to catch.
Review
We have a usual story of a poor man falling in love with a rich and affluent family lady reminds us the story of a film of the nineties. We see everything right from the couple interested in starting up their own fresh life to sustain in tough conditions due to their opposing families to the honor killing, it has all the things we used to catch in the earlier movies thus giving a blend of mundane story. The only difference one can find is the rural setup that ruins the show as they were unable to mix and blend things the right in the said setup.
However, the ordinary story is not just the problem but the amateurish performances showcased by the acting skills of these artists as presented by the director Shahid Khan seems to be the disappointment. Well, we do not see much urge to catch the film as it ends up becoming preachy by the journalists who becomes a stale stuff to watch with the moral discourse coming from the two and ironically it goes against the principles of journalism. The other elements like music, screenplay, character play, direction, photography and editing seemed ordinary. However, what really goes in the film to attract the audience in still missing in it.
Jhing Premachi The Last Word
Overall, there is nothing much to catch in the film it could have been made with better entertainment value but alas, it ends up just another un-of-the-mill movie. So, if you are skipping this one, you are not likely to miss much in M Town.