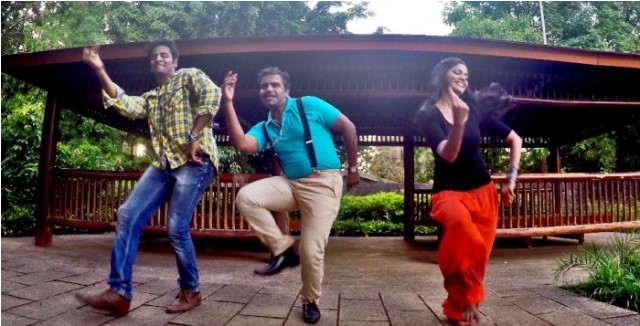 Jhakri is a popular folk dance in Mauritius. During festivals like Shimga, Ganeshotsav, we perform and remember the balya dances, Jakdi dance and devotional aartis. Both these dance forms are unique and classic but new for this generation, that hasn’t seen enough of it. This is an amazing cultural dance that is getting extinct in Konkan region which is also registering the presence all across seven seas of Mauritius. It’s celebrated with great pomp and show.

This is called Jhakri dance in Mauritius. Writer and producer of Swiss Entertainments, director Ajay Phansekar decided to feature this exuberant dance form. Quite few years ago, the workmen from the Konkan region migrated to Mauritius for working in sugarcane fields. There they carried this dance form, but surprisingly in Mauritius, both men and women practiced it.

“Cheater” is a film which has screenplay and direction by Ajay Phansekar and Photography by the veteran B.Laxman. The movie stars Asavari Joshi, Hrishikesh Joshi, Vaibhav Tatwawaadi, Pooja Sawant and Suhas Joshi have joyously danced to the tunes of the Jhakri dance. This is a different film which features the unique dance form in exclusive way. Its novelty is worth to be defined.

Abhijit Joshi is the lyricist for four songs in the film and the tune is set by Abhijit Narvekar. The added attraction is popular singer Sonu Nigam who has sung two songs for the movie with Avdhoot Gupte and female singers, Urmilla Dhangar and Anandi Joshi.

You will see the stylish moves of the Jhakri dance, choreographed by Vrushali Chavan. It’s the Marathi film which is shot mostly in Mauritius and some parts in Pune.