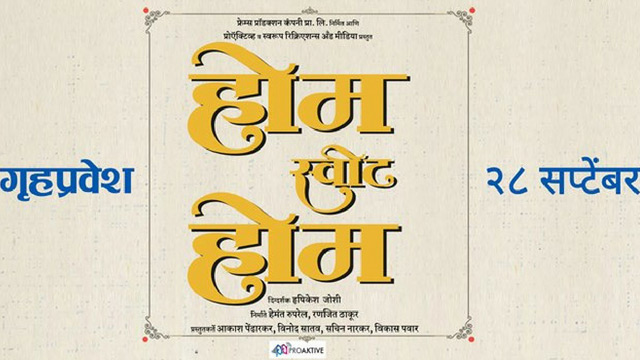 The M Town had one film to release, which came in the form of Home Sweet Home. Once again, the M Town filmmakers have taken resort in English titles and this is not an exception. The film was released on this Friday over the silver screens and was able to get only mixed reviews with ratings starting from 2.5 to 4.0 by most of the critics and reviewers. It was having a debutante filmmaker who was also the part of the star cast, hence to expect much on the first day was a tougher option. Secondly, the Hindi Cinema too had given the audience some better options in the form of Sui Dhaaga and do not forget about the Asia Cup when India was facing the tigers to win the match.

Also, the film had a meager buzz in the media with low star value and improper planning for its promotion in the media. It came silently without creating much buzz. Also, the trailer and other things released about the film had little difference in the media. Thus, we had less to get from this film. Now, talking about the occupancy report, it was reported around 30 to 50 percent in most of the theatres where the film was released in the state. The single screens did well as the movie was released in these theatres rather than multiplexes which had only one show for the audience.

The family drama as the makers have claimed had less to gain over the box office. The film had late actress Reema Lagoo, which did work for the makers yet it failed to gain much over the box office. Looking at the collection, the 1st day box office collection for Home Sweet Home reached to around 0.86 crore, which is an okay figure for a drama movie with average rating and average occupancy. Now, if the film is able to create a decent buzz in the media then it can return back with a good collection at the box office during the 1st weekend. Well, stay tuned to know more about this film and others only with us.