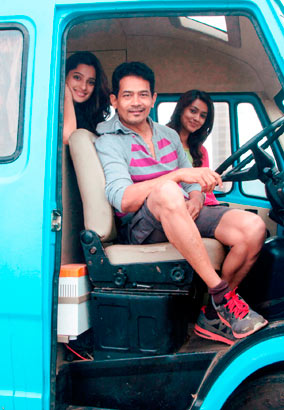 The plot of the film “Happy journey” encompasses the story of Aaron, a dead heart cricket fan who desires to be a professional player. By the time he got selected for an under fifteen cap; he got victimized of a road accident and ended up losing his eyesight. Still, under the inspiration of his mother, the young lad managed to fight back in life and eventually to bag a place in the All India team for blind cricketers. He was about to move for Bangalore to join the camp but at that point of time, meeting with the second and most severe tragedy of life with his mother untimely departing for her evenly abode. Aaron, the male protagonist, loses up all of the aspirations and hopes in life and ultimately managed to get the job of a helper in a hotel. But, he managed to fight back and ultimately secure a place in the team of blind crickets at all India level.

The popular star, yet again gave out a sparkling performance as Aaron and so as Lena, as Alice, the mother of Aaron. Other of the cast like Idavela Babu, Balu Varghese and Gopikrishnan did justification to their repute. Boban Samuel, the director had definitely made a wonderful effort to provide some inspiring message while people go for entertainment. The best part of the movie is that it made us to thought about the challenges and hassles that the blind crickets has to face.

Cinematography by Mahesh Raj and its music composed by Gopi Sundar are found to be soothing. The film is observed to lag in the post interval period, contrary to the show it had put prior to the intervals.

In case the second part was managed properly , definitely the movie could have a got a place in the list of best releases for the year.