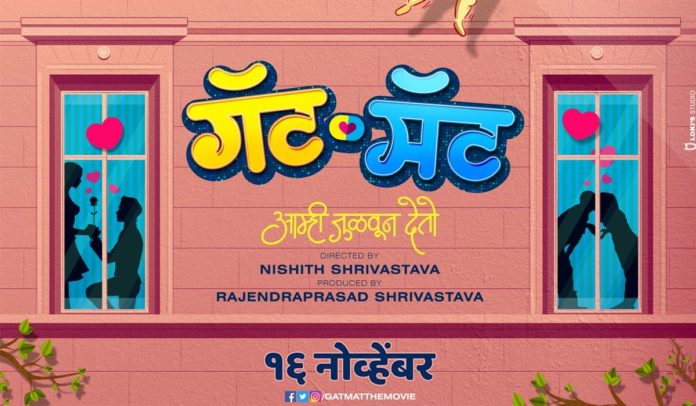 We have been hearing about the old axiom since long that marriages are made in heaven and they are decided up there only. But with the upcoming M Town film Gatmat, the soulmates are seen meeting in this very fatal world itself. So, regardless of the fact that how people would meet, and do things, the couple are still seen coming together in this world. The movie deals with similar theme is all set to entertain the audience in the coming times. The makers come together in the form of ‘Yashraj Industries’, while they have made sure to rope in popular playback singers, competent music composer and director Avadhoot Gupte who seems to be presenting this film!

Recently the makers were seen releasing the teaser poster of the said movie and they made sure to leverage the eve of big time festive season called Ganeshotsav! The audiences are liking the poster and it is going out to be viral in the social media. Now, talking about the film Gatmat, it is releasing on 16th November while it is directed by Nishith Shrivasatav, while produced by Rajendraprasad Shrivastav. The movie happens to have a unique subtitle which says -Amhi Julvun Gheu!

As you check the poster, you can easily spot two love angels in it. Also, the poster is seen having a number of symbols and signs, which talk a lot about the audiences about the theme of the film. The genre of the film love and romance and it happens to be a hardcore romantic movie in M Town. The makers are yet to release the star cast of the movie but one thing is sure, this movie is likely to get connected with the youth audiences the best claims the makers of this M Town film. So, what do you say about it, do let us know and share your views about it. We will be waiting for your comments and valuable words, do share them on the following comment section