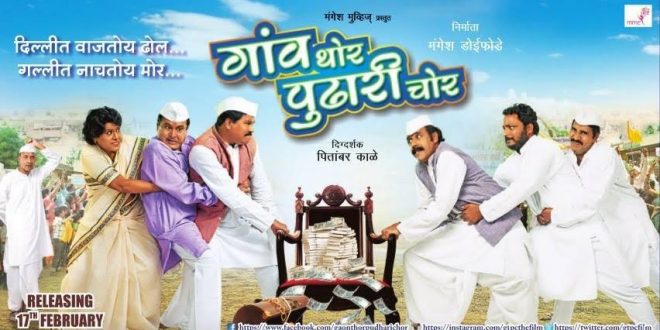 The story of Gaon Thor Pudhari Chor is written by Aaba Gaikwad. Director Pitambar Kale has also written the dialogues and screen play of the film along with Laxmikant Vispute. The film will be masala film with all the elements of a rib tickling comedy while it will also expose the unjust practices going on under the guise of development works in villages. The songs of the films are also released wherein one can see the typical setting of a Maharashtra village. The dialogues are also written keeping in mind the colloquial style of the region.

Gaon Thor Pudhari Chor will be releasing on the coming Friday. The political satire is all set to entertain the audience. Music is given by Nandu Honap and singers Vaishali Samant, Rohit Raut, Neha Rajpal and Siddhant Bhosle have rendered their voice to the songs.