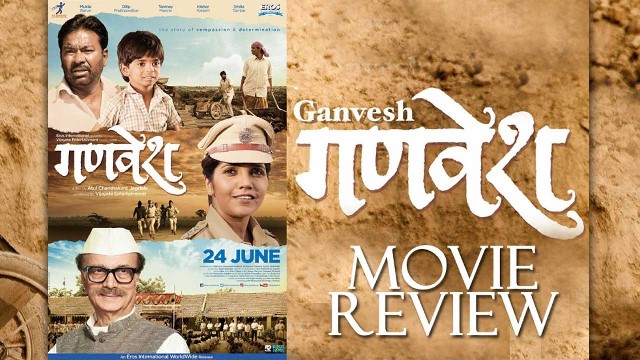 The M Town has a couple of interesting films to release this Friday, which certainly include the one called Ganvesh. The movie is directed by Atul Jadgale, while it is produced under the banner of VIjayate Entertainments. The film has Kishor Kadam, Dilip Prabhavalkar, Mukta Barve, Smita Tambe, Nagesh Bhosale, Guru Thakur, Suhas Palshikar, Sharad Ponkshe, Tanmay Mande and Ganesh Yadav in the lead and supporting role. The story, screenplay and dialogues are being carried out by Tejas Ghadge, whereas the music is carried out by Nihar Shembekar. The plot of the film is based on a couple of labor class who die hard to give their kid education and meeting up challenges in small and trivial demands like new dress for a Independence Day program for their son. Time to dig in in the film to get the crux of the same:

The actors Kishore Kadam and Smita Tambe are becoming increasingly popular for playing on-screen couples especially from rural areas. Once again they are a blue collared couple in a small village who struggle even for the basic things in their life. And unlike their previous film Partu, they have done justice to their performance. It is indeed a treat to watch the two once again especially the lady Smita Tambe who has swallowed up the character very well along with mastering the mannerism of a manual labor in the film, which the character demands from her. It talks about their commitment to character for adding authentic paint for the film. Their effortless performances simply leave everyone glued to the screens.

The couple in a labor role has as a son who has been chosen to make a speech for a visiting minister at the Independence Day function, however, the condition is applied that comes in the form of having a new uniform for the program. This follows the struggle of getting a uniform for their beloved kid who has pinned all the hopes giving the speech. The premises you find in the movie is simply incredible but you can find a couple of good written scenes in it mostly the ones having Kishore Kadam at the center, which makes the film a treat to watch. However, soon you can find the things dragging a bit, which turn out to be the major undoing of the movie. For instance, you have a scene wherein a tailor is requested by Suresh to sew a new shirt for his son as he is short of time, but the tailor is seen delaying things with one after the other reason.

Though scene is good yet it can be done with better expression and performance. One can understand the anxiety of Suresh in finding new uniform home, however, the scene simply overstays as it welcome and soon makes the audience disconnect from the movie. This is true of the movie as a whole as well. Besides, you can find two different tracks in the movie, which involves the lady police office Meera who is concerned about the dwindling of the respect for uniform. On the other side you have a minister, who uses handspun cotton uniform. Despite the minister is a Gandhiian by thought yet his craving for material things coming in the form of uniform is a challenge for Suresh.

The screenplay by the man called Tejas Ghadage is very much ambitious and he has managed to blend these three elements of the film in a justified fashion. However, the film will give you a feeling that it has not much to deliver in the name of entertainment but to address the social aspects of uniform in it. You may not find the tracks having Meera and the education minister having no hold for the attention and also you may find the film falling over the trap of emotional melodrama at the climax.

The film has no doubt good performances by the lead actors with some really nice written scenes along with a cool background score as well but the film fails to engage the film to a greater extent. In a sense, with social elements of Uniform being addressed, the film is more of a niche movie and thus has not much in its small plate to offer the audience.
Rating – 3.0