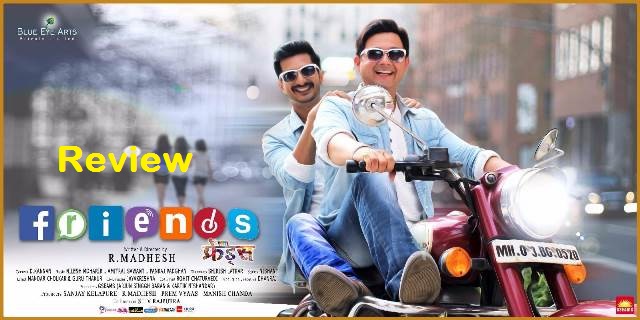 Unlike B Town, even the Marathi Cinema has a couple of releases every Friday and the film Friends is no exception. The film is directed by R Madhesh, while it is produced by Sanjay Kelapure and others under the banner of Blu Eye Arts Pvt. Ltd. The film has Swapnil Joshi, Sachit Patil, Sagar Karande and Gauri Nalawade in the lead roles. As the name suggests, the film is all about friendship and the conflict that comes in between when a girl walks in the life of the two friends. Let’s  have a look at the same as under in the following paragraph:

The title suggests that the film is all about friendship, love and sacrifice. It starts with loads of positivity Neel played by Joshi bumping into the life of Bhairavi played by Gauri on his way to Mumbai. He has a love at first sight for Neel and on the other end, he asks for his friend Raghu played by Sagar Karande in order to find out about the girl. Soon Neel meets another guy called Karan played by Sachit Patil who is an angry young man but with a golden heart. Despite their wrong foot, the two (Neel and Karan) end up becoming best friends. On the contrary, Neel meets again that girl – Bhairavi and proposes her but gets the rejection, however, with a couple of efforts he finds her in her fold and soon realizes that she is his best friend’s sister. So, now, he is a critical situation as to whom to consider, love or friend. So, what happens at the last is interesting to catch.

Remember the old axiom, which says, where a will there is a way is and for actors like Swapnil Joshi in any film, when there is love and conflict you find him there. The star with lover boy image suits the character very much; however, at times you would find the film taking the path of south Indian style. The script seems to be very much predictable for the audience, which can be called as  a shocker thing for the  audience. Though the south Indian style action and the online line dialogues attracts the audience with whistles, however, the unwanted loud background music and improper placement of things really malign the spirit of the film. Similarly the untimely songs and punches mars the film to a great extent.

Indeed Swapnil Joshi is an accomplished actor and enjoys his own stardom in M Town. However, in this film he seemed losing his style for the sake of becoming a south Indian star in which he seemed something really an odd man out in the film. But the real surprise package comes in the form of Sagar Karande who gave his cool performance giving something different to the audience for which he is not known for. However, the novice Gauri who had just a small screen presence since the film is all about friendship and less of love, her performance seemed simply okay and not par with the other two actors.

Talking about direction, screenplay and editing, these important tasks are seen just an average, which gives a wrong impression over the movie. The music sounds good as most of its songs are being liked by the audience, which managed to appear better even at the silver screen. The hits and misses in terms of editing and screenplay can be easily witnessed by the audience, which makes the film dull in terms of technicalities. Location seems okay, but at times makes things a big mess, which unfortunately makes the film crawl in the second half especially giving a poor show in the climax.

Ironically, the film Friends fails to have a strong content as it seemed claiming during its promotion. If you are keen to catch any simple entertaining film, it can be your perfect watch provided the other released the same day fail to impress you. The film ‘Friends’ is an amalgamation of decent performance (not from all the actors), good music, average direction, screenplay and editing backed by south style action and drama, which together doesn’t really give much of the ratings.