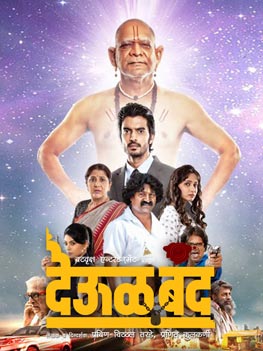 The end of July will give you a glimpse into the much talked-about movie “Deool Band” where Mohan Joshi is playing the role of Akkalkot Swami Samarth. 31st July is the release date of the movie and it also stars Gashmeer Mahajani, Nivedita Saraf, Girija Joshi, Shweta Shinde, Satish Alekar, Kiran Yadnyopavit, Sharvari Jamenis, Sunil Abhyankar and others.

Directed by duo Pravin Vitthal Tarde and Pranit Kulkarni, who are making their debut with the movie, the film is based on the theme of science vs spirituality. It is about a scientist who does not believe in God and Swami Samarth, flag bearer of spirituality. The interesting tussle is full of drama and humor where you will get good doses of humor and wisdom. A complete entertainer, it has been shot across the country at multiple beautiful locations. The music and choreography is already a hit and the audiences are very excited watch the entire ensemble.

The character of Swami is the highlight of the movie and more so because the talented Mohan Joshi is essaying the role. He has used prosthetic makeup to create the desired effect and the trailers have generated lot of buzz about the same. Since many other actors have done the role in the past with Praful Samant’s Swami in TV serial “Krupasindhu” being a major hit, Joshi’s reprisal is being eagerly awaited.

And the wait will be over in few days. Just get your tickets booked. The film is certainly going to see packed theaters, at the opening.