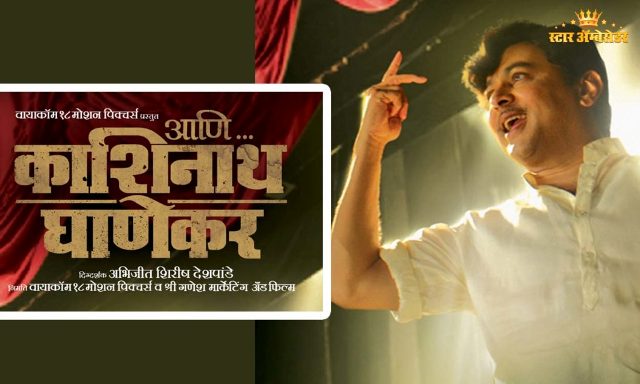 The film Ani Dr. Kashinath Ghanekar happens to be the much awaited movie in M Town, and the makers have finally embarked upon with the trailer and the audience are enjoying the teaser released by them in the media. In fact, they have been going go over the released teaser. It promises to represent the film that remains unapologetic regarding the lead actors and thus understand both the negative and positive side of the the personality. As you check the teaser, the actor Subodh Bhave seems to be very much fit into the character in the right way as the first big superstar of the M Town theatres.

As you check the teaser, it simply introduces a number of iconic people that come along from the M Town theatre fratenity of such times. From the Master Dattaram, which is played by Suhas Palshikar to the man called Vasant Kanetkar played by Anand Ingle the film has a number of other roles to showcase including Bhalji Pendharkar played by Mohan Joshi, Sulochna Didi played by Sonali Kulkarni & Dr. Shriram Lagoo with character called Sumeet Raghavan and everyone seems to have gone to speak about Dr. Ghanekar & what they really think about this man. Most surprisingly is the man that seem to despise him and yet we see the audiences who love him a lot!

Of late, we have seen a number of biopics coming in Both the B Town and the M Town, which seems to be an interesting thing about this film. This film is certainly not an exception though as we find a number of filmmakers in Marathi Cinema too are investing into this genre and embarking with one film or the other. The film talks about the man and his life giving one thing or the other in the media. The film ‘Ani..Dr. Kashinath Ghanekar’ is releasing this Diwali on 8th of November, so its time for you to make sure you mark the date! Get set and go! And stay tuned to know more about it.

Me Shivaji Park by Mahesh Manjrekar is a Star Studded Film