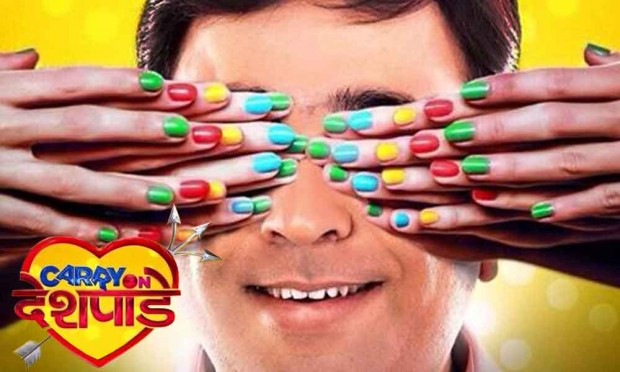 This Friday, we had only one Marathi movie to release, which include the comedy film called Carry on Deshpande directed by Vijay Patkar and produced by Ganesh Hajare under the banner of Aatharva 4 U Recreation & Media Pvt.Ltd. The film has lead stars including Pushkar Shorti, Sagar Karande, Hemlata Bane, Manasi Naik, Sanjay Khapre, Jaywant Wadkar, Seema kadam and Vijay kadam. The story of the film has been jotted down by the Hemant Edalabdkar, while the screenplay is being carried out Hemant Edalabadkar. Now, let us dig in deep into the film and get the crux of the film in the following paragraphs:

Meet Mr. Deshpande an ad man by profession played by Pushkar Shroti who is touch with different girls on a constant basis.  He is a husband of two wives played by Hemlata Bane and Seema Kadam, which interestingly lives in the same house. In other words, he has two families running in the same house, which itself is a start of an interesting comedy film. Amidst all the daily roller coaster encounters from two different wives wherein he acts like a sandwich, there comes another lady (Mansai Naik) in his life. Thanks to his flirtatious nature of this man who leaves no stone unturned to woo any girl coming in his touch.

Though the film treaded a different path to entertain the Marathi audience, however, digging deep, it seems very much similar to the plot of the recently debut film of Kapil Sharma Kis Kis Ko Pyaar Karu who lives with three wives in three different homes with different names. It seemed to carry the elements that had the potential to entertain the audience; however, it failed to do so to the extent it should have been. The reasons are obvious, the concept though may appear to be entertaining on the face of it; however, it failed to display the right way over the silver screen, which ruined the things. Many a times humour is overly used, which makes it abused ones in the film.  The element of glamour has been added haphazardly, which doesn’t make the film suitable for the family movie.

Pushkar Shrotri who is a good actor is seen getting wasted here, thanks to the poor direction, which made all the mess for the film. Manasi Naik who seemed more glamorous in the film and had not much to show rather than her skin, however, the newcomer Kadam seemed very much comfortable before the camera giving her best performance, while Bane too managed to give a decent go her acting performance. Overall, the combined efforts of all the lead stars failed to give much over the silver screen making it salvaging kind of piece.

The director seemed to have gone overboard with the comedy, making the mess of the film in a big way. Thus the film, which virtually appeared an okay stuff failed to do much over the silver screen, wished the director had taken care of the same. Music and other elements like screenplay, editing and location seems to be okay, however, the overdoing of Masala in the film made all the mess giving an average comedy, which may not be liked by one and all.

The Marathi film Carry on Deshpande is an average film with poor coming timing. This simply gives not much of the opportunity to the audience to laugh. Despite having all the elements like item songs, and comedy elements, the film failed simply because of the loud acting and overboard direction. All the elements failed to mix properly thus giving an average end product to the audience. It seems that the film has been produced for a certain section of audience in mind, which may like such kind of soft porn and adult based concept movie, rather than attracting all the sections of the audience from the Marathi cinema.