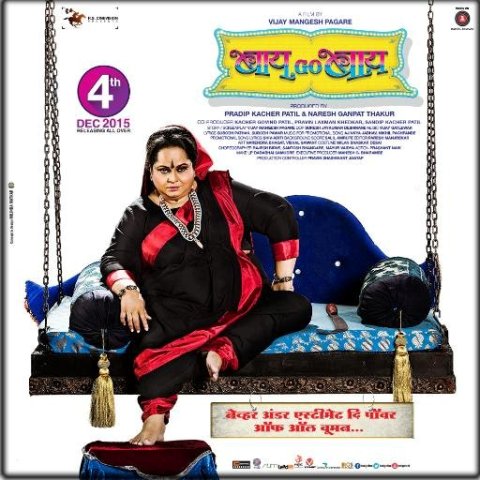 Usual Fare Being Served with some different Package

This Friday you have a couple films to hit in the Marathi Cinema. This certainly includes Bai Go Bai produced by Pradip Kacher & others, while it is directed by Vijay Pagare under the banner of R S Cinevision. The film has Nirmitee Sawant, Nayan Jadhav, Vijay Patkar, Sheetal Phatak, Shashikant Kerkar, Purnima Ahire Kende, Jaywant Bhalekar, etc in the lead and supporting roles. The music for the film has been given by Vijay Gatlewar and Nikhil Pachpande. The film falls under the comedy or humour genre. Now, let us get into the film to get the crux of the same in the following paragraphs:

You will find the humour amidst the two lovers and the mother of the girl who is seen in the commanding position. You can find the film revolving around Bayajakka played by Nirmitee Sawant who is seen having some amount of grudge against the men. Thanks to her mismatch marriage that created a permanent vendetta against men. She in her commanding position is seen creating a couple of fool hardly rules for the male population for the obvious reasons. All the men in the village are seen working for this lady and are not allowed sporting moustache just to deny the sign of manhood over their face. One fine day you find Baija’s daughter (Shyamal) falling in love with a man called Shiva who has come down to this village. Though initially she finds hesitant to express hr love for Shiva but soon does it to embark as a rebel against her mother. They faces the wrath the established rule of the land, will their love succeed or they face the music is interesting to catch over the silver screen.

Unlike any other love story in Marathi Film, the love saga in Bai Go Bai is no different. So, there is nothing new in the film to catch. On top of it you can find lose lines and pathetic jokes, which you must have heard a number of times, so laughing at such junctures are difficult to catch in the film. There is not much to catch in the film. Also, checking out the performances of the film, there isn’t much to discuss. Right the lady at the centre who is known to rule this man’s world to the couple played by Nirmitee Sawant and Nayan Jadhav. There is nothing unusual about this love story and their performances.  The others too remained the same over the silver screen. The other elements like screenplay, editing, cinematography and other technical stuff are mediocre, which failed together to make any difference over the silver screen.

This comedy Marathi film is soon challenging the patriarchal system, which seems to have a woman at the helm of affair. Though the film is unusual fare, but it has been served with different kind of packaging. Hence this cannot be the piece of cake for every section of the Marathi cinema; hence, unless you are the fan of this genre, the others can definitely go for a miss. Therefore the film doesn’t really deserve a higher rating.