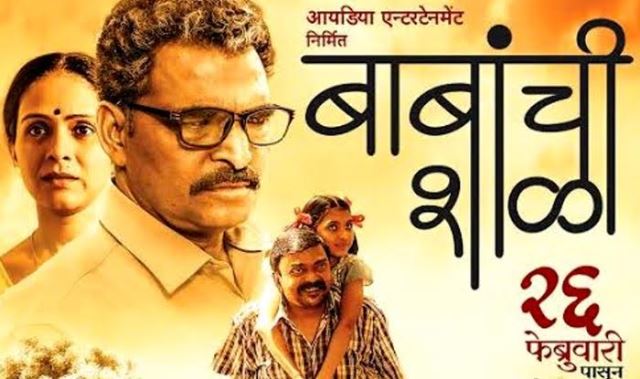 A Social Drama with Subtle Message Backed with Good Performances

This Friday, we didn’t have much of the Marathi movie releases except the two, which certainly include Babanchi Shala. This Marathi social drama has Sayaji Shinde, Aishwarya Narkar, Shashank Shende, Kamlesh Sawant, and Chhaya Kadam, in the lead roles, while Arti More, Umesh Bolake, Milind Adhikari, Kartik Chavan, Manjula Khetri, Kavita Chavan and Shreyas Raje are found in the supporting roles. The film is directed by R Viraj and produced by Vilas Mane and Umesh Nathani under the banner of Idea Entertainment. The music from Soham Pathak, Kamlesh Bhadkamkar and Neela Satyanarayan while the photography is done by Ankush Birajdar. The film is inspired by the Bollywood film called Do Ankhen Barah Haath. Now, let us dig in deep into the social drama and get the crux of the film as under:

The film has a story that revolves around the life of Mahipat Ghorpade played by Shahank Shende, who has murdered his nagging wife who keeps on abusing her husband to spend money on their daughter Sonali’s education. He kills his wife when she argues him a lot which is also supported by his mother, however, later he repents when he taken into custody. After going behind the bars, he has to leave his daughter on the mercy of others who ill-treats her. Sonali is seen suffering from trauma due to the ill treatment, however, she is taken care by a helping hand in the form of a social worker called Neeta Satam played by Chhaya Kadam who then requests the Jailer to allow the kid to meet his father, which is almost after six years. The Jailer plans to rehabilitate   the prisoners called Babanchi Shala to address this man along with other prisoners but due to some mischief by a fellow prisoner, his plan gets rejected by the home minister, but he continues to do his own way.  So, what happens next is interesting to explore.

The film sends out a tangible message to the society which is reluctant to accept the prisoners and their children with any favors. Though the film is serious, it has also a couple of puns and humor in it to make it a bit lively and entertaining. In terms of screenplay, the director has made it cool showcasing how families of culprits face when they are seen undergoing through trials and tribulations. The high note emptions and low pitch humor seems going so well over the silver screen.

The dialogues are smartly crafted backed by some good performances especially by the lead actors like Sayali Shinde, Chhaya Kadam, Shashank Shende and others making it a treat to watch. Though in order to nullify their effects of seriousness, the director has inculcated some of the humor elements in it with smartly written and puns by Kamlesh Sawant. The other elements like music, screenplay, editing and star performances remained par, which helped in increasing the entertainment value of the film the best.

Though the film Babanchi Shala is similar to an old Bollywood film Do Ankhen Barah Haath, but comparing it fully will not be justified at this juncture. The former has hitches and misses, which is not the case with the latter as it is made very aptly. Yet the film managed to have a subtle message for the audience for prison reforms. Remember all the prisoners are not perverts and they have repentance deeply ingrained in themselves. Thus there is a great scope to reform them and instill in our society as responsible citizens giving them a second chance to survive and sustain in this world.