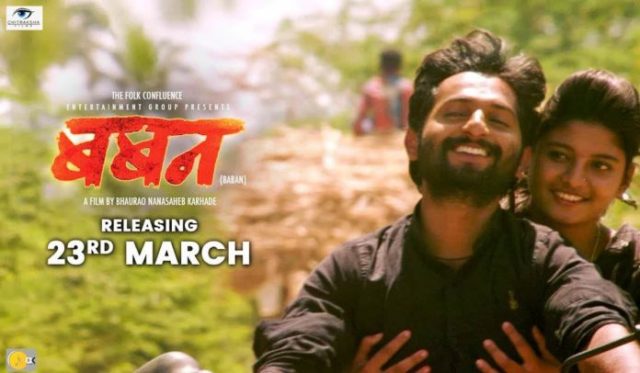 Director : Bhaurao Nanasaheb Karhade
Star Cast : Abhay Chavan, Shital Chavan, Yogesh Dimble, Devendra Gaikwad
Genre – Drama and Romance
Studio : Chitraksha Films and The Folk Confluence Entertainment Group
Story, Screenplay and Dialogues : Bhaurao Nanasaheb Karhade
Release Date : 23rd March 2018
Synopsis: The M Town seems to embark upon several films and this certainly include Baban, which is releasing this Friday on 23rd March 2018. The film is directed by Bhaurao Nanasaheb Karhade, while it is produced by slew of people including  Vitthalrao Nanasaheb Karhade, Pramod Bhaskar Chaudhary, Bhausaheb Shahaji Shinde and Monali Sandip Phand under their banners like Chitraksha Films and The Folk Confluence Entertainment Group. The star cast of the film happens to be interesting which include Abhay Chavanm, Shital Chavan, Devendra Gaikwad, Yogesh Dimble, Pranjali Kanzarkar, Gayatri Jadhav, Chandrakant Raut, Mrunal Kulkarni, Yashu W $urekha, Bhausaheb Shinde, Krutika Tulaskar, and Seema Samarth who would be seen in both lead and supporting roles. The Story, Screenplay and Dialogues are been jotted down by Bhaurao Nanasaheb Karhade, while the lyrics have been jotted by Dr. Vinayak Pawar and Suhas Balasaheb Munde, while Background Score is carried out by : Sarang Kulkarni and the Cinematography (DOP) is carried out by Ranjit Mane.
As you check the trailer, you get the rough idea of the movie. The film happens to be a romantic and action drama film. The man in the lead role is in love but has been opposed and messed with a local politician. He then takes up law in his hand to teach the young man a lesson who has been messing up with the actor in lead role and the lady. So, what happens next would be in interesting to catch. The sound design has been carried out by Shoaib Maneri, while the Background Score is carried out by Sarang Kulkarni and many others did their job to make this film up. So, what do you have to say about this film do let us know and stay tuned to know more about this movie and others.