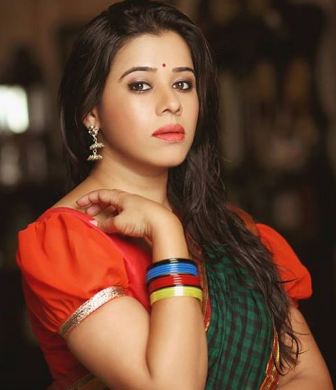 Anita Date is not an unknown name in M Town movies and TV serials. She was born on 31st October 1980 in Nasik and was brought up in the same city. She did her schooling from itself, however, her interest was in arts and culture that led her to pursue her masters in theatre from Lalit Kala Kendra as she was very much inspired by her uncle Upendra Date who is a popular name in Marathi Natak. In fact, she was engaged in theatres from her young age apart from performing in a number of plays and drama of school and college. Hence her interest brought her to theatres and then to TV and finally to the silver screen.

Some of her plays include Just Halka Fulka, Uney Pure Shahar Ek, Mahasagar, Tichi 17 Prakarne, Necropolice, Govinda, Bai Ga Kamalch Zali, Bar Bar and Cigarette to name a few. She also did a number of Hindi and Marathi TV serials, which include Balveer, Bandini and Bhai Bhaiya Aur Brother the Hindi serial, while the Marathi ones include the Agnihotra, Manthan, Eka Lagnachi Teesri and Anamika to name a few. She then got the chance to do silver screen movies. These include Coffee Ani Barach Kahi, Ajoba, Popat, Aiyya, Mynah, Seema, Zor Lagaa Ke Haiya, Ek Paying Ghost, Jogwa, Adgula Madgula and Gandha to name a few.

Now, talking about her personal life, she is married to a man called Chinmay Kelkar who happens to be from Pune. Her upcoming TV series include the one called Ban Maska which is a Marathi TV serial which is to be aired from 22nd August 2016 and would be aired at the prime time sharp at 8 PM. She is among the popular names in M Town and happens to be among the top actress in all the mediums in Marathi media.

Previous Catch the trailer of One Way Ticket
Next Parna Pethe