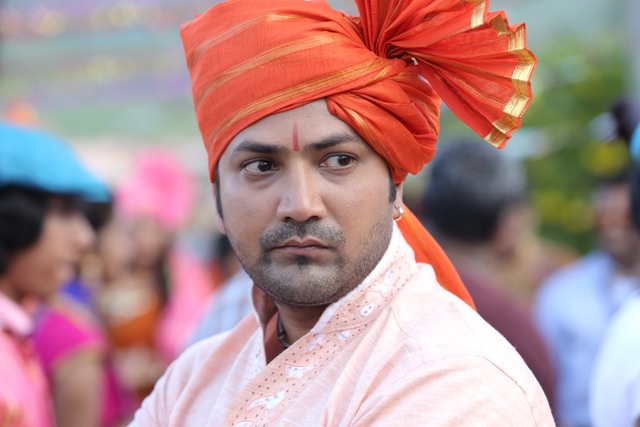 Tall, dark and handsome Bajrang Dudhbhate… meet the second nominee for Poshter Girl’s swayamvar. Doesn’t his introduction sound just perfect for matrimonial proposal? But taking this candidate forward is an equally challenging task. Though blessed in all departments, Bajrang is too scared of the opposite gender. To him going to college meant studying with girls, so he never went to college. And this bundle of nerves is played by none other than our dashing Aniket Vishwasrao. The audience knows Aniket as the charming, romantic hero of our Marathi industry. And watching him play a different avatar in Viacom 18 Motion Picture’s ‘Poshter Girl’ will be surely thrilling.

Originally a farmer, his current profession is Body-building. Too dedicated to his job he focuses only on exercise, exercise and a wholesome diet. Girls are definitely nowhere on the list. And Poshter Girl’s uncle has shortlisted this young champ as the second nominee for the swayamvar.

How will he qualify for further rounds? Will he gather guts to charm the sizzling Poshter Girl? To know all about this visit the theaters near you on 12th February…

Viacom18 Motion Pictures is India’s finest fully integrated motion pictures studio that has emerged as a force to reckon with by delivering a stream of critically and commercially successful films. Offering differentiated and meaningful cinema, some of its iconic releases have been Mary Kom (2014), Queen (2014), BhaagMilkhaBhaag (2013), Madras Café (2013), Special 26 (2013) and Kahaani (2012) to name a few. Viacom18 Motion Pictures is also one of the few studios to have successfully ventured into regional films across languages like Bengali, Marathi, Punjabi and from the South. The Studio has also backed path-breaking and much-appreciated creative work in the form of hits like Bombay Talkies, Gangs of Wasseypur I and II, OMG – Oh My God!, Manjunath, Shaitan, That Girl in Yellow Boots, PyaarkaPunchnama, Inkaar, Saheb, Biwi Aur Gangster Returns and  Boss amongst others.