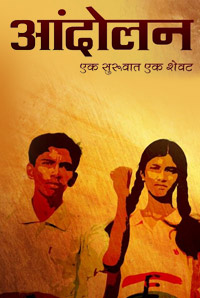 Plot : The story of the Marathi film Andolan Ek Suruvat Ek Shevat is all about a triumph between the ideologies that we learn over the books and things as it comes in reality. The students, getting their idols in Mahatma Gandhi , Ramabai or Dr. Ambedkar, desires and dreamt of a society that was imagined by these great souls. But the reality showing a different ball game, triggers the quest in search of the instances of these ideals if being materialized somewhere at some place. This film foretells those steps that the future leaders of the country might undertake and it is all about a movement to bring changes to the existing pattern and practices of the Indian society. Thus, the genre of this movie can said to be of a political drama and satire type and the movie aims to bring a shift in the political and social standing s of the country with the resurrection of the students.

The casting of this movie shall be made with Milind Gawli, Arun Nalawade & Nisha Parulekar, Sagar Panjhari, Sansrkuti Kamble, Pritesh Parkar & Aaditya Nerurkar. The surprise element in it casting shall be the debut of the activist, Anna Hazare, in this film upon his own role.
This movie shall be directed by Prashant Madhukar Rane and the score and tunes to this movie being composed by Harshit Amitraj. To give support and relief to the director, the cinematography of the film is being take care by Amit Singh. While the film is based on the screenplay written by the director himself, the credit of producing the exceptional movie has to go Babubhoir Koprawale, under the banner of Shree Krupa Production.

As the responses to the trailers and the promotional activities of this film displays, the film had already attracted the attention of people and therefore the chances for its success in the box office, seems to be on a higher side.