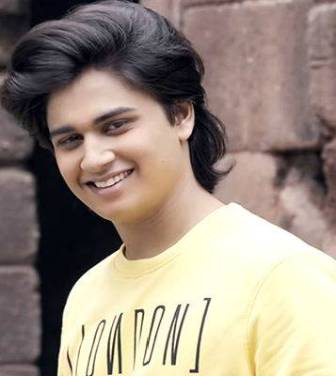 Abhinay Berde is 20 years old son of veteran Marathi actor Late Laxmikant Berde. He is making his debut in Marathi films next year with Satish Rajwade directed film Ti Sadhya Kay Karte. The film has a young cast and Abhinay will be essaying role of protagonist in his younger days. The protagonist is played by popular actor Ankush Chaoudhary. Even before he got a chance to work in this movie, Abhinay was always associated with Marathi cinema since he inherited his love for movies from his parents.

Abhinay is the son of Laxmikant Berde and Priya Berde both well known actors in Marathi and Hindi. He has a sister Swanandi. He was born on 3 November 1997. He was merely seven years old when his father passed away due to cardiac arrest. Since then he has been raised by his mother Priya Berde. Priya and Laxmikant Berde have acted together in popular Hindi movies such as Mene Pyaar Kiya and Hum Aapke Hain Kaun. Their Jodi was very popular in the eighties and nineties in Marathi and Hindi movies. They had an exemplary simplicity and realistic touch to their acting skills. Until Laxmikant’s death in 2004, he was a popular comedian known for natural skills in acting.

Abhinay grew up in Pune and attended school there. Right after his schooling, he followed his interest in films and joined film makers. In the year 2013,when Zapatlela 2, the sequel of Laxmikant Berde starrer Zapatlela, came out there were rumors that Abhinay was making this debut with this film. Unfortunately that did not happen. Zapatlela was a huge hit of Laxmikant which was directed by Mahesh Kothare who later made Zapatlela 2 and will be releasing Zapatela 3 also.