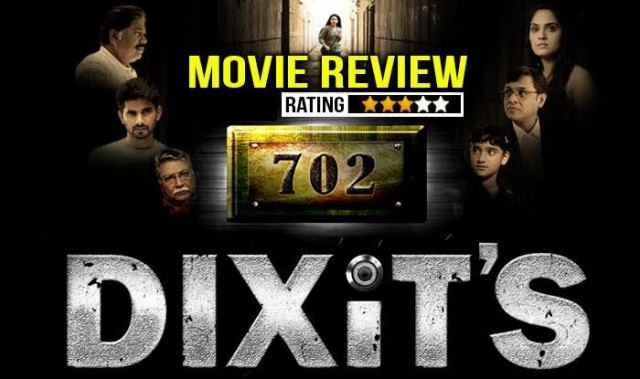 This Friday, you have two Marathi movies released, which certain include 702 Dixits. The film is directed by Shankh Rajyadhyaksha, while the story is given by Rohit Jail and the music is given by Shubhankar Shembekar. This urban thriller is produced by Rohit Jail and Prashant Umbrani under the banner of 9 Star Prime Entertainment. The film has the lead stars like Vikram Gokhale, Pallavi Patil, Gauri Nigudkar, Jaywant Wadkar, Vijay Andalkar, Ruchi Jail and Shrirang Deshmukh. The film revolves around the family of Dixits and the issues surrounding the same. Now, let’s dig in deep into the film to get the crux of the film as under:
Plot
Meet Mr. Kaavya & Yash Dixit can be called as a young jet couple with lucrative careers leading a cool life with their 10 year old daughter called Reva. However, their life comes to standstill when the governess called Asha who takes care of their daughter falls down from their home balcony and passes away. Yash who was present at that fateful day is being arrested by the cops on the grounds of suspicion. Though Yash pleads for his innocence before the cops but all the witnesses and evidences goes against him but his wife Kaavya is desperate to prove the innocence of his wife. She then calls his childhood friend who is an ex lawyer for help. So, what happens next, is he proved innocent or is he the one who is the culprit for the same. What happens at the next is interesting to explore while catching up the film.
Script Analysis
There isn’t much filmmaker in Marathi Cinema who have ventures in suspense filled movies, which are inspired by real time incidents. However, with this film – 702 Dixits is very much predictable film that can be seen occurring in the life of any family. So, in terms of content, the film has limited stuff to deliver, however, the skill lays at the screenplay and direction, which together has made the thriller interesting for the audience. Thus the script despite having a couple of flaws was seen suffering a lot in many ways. However, it was a good attempt by the director to add a couple of interesting and thrilling elements that comes as a ray of hope for the film securing in some way or the other.
Star Performance
The star performers of the film were seen a bit over average in terms of performance. Be it Pallavi Patil, Jayant Wadkar or Gauri Nigudkar, however, talking about some veteran actors like Vikram Gokhale, he seemed outstanding in his performance though he had a small screen presence yet he was good in his show. Others remained average and over average to some extent.
Direction, Music, Screenplay and other elements
There are several flaws in the film, however, the director deserves loads of applauds for his incredible direction that has managed to add some fuel in an otherwise content-less film. The other elements like music failed to fit into the scope except the two songs, which seemed appropriate for the film at different junctures. The other technical elements weren’t that par to the expected yardstick for not hiring competitive people in this regard.
702 Dixits – Last Word
The film 702 Dixits is all about an emotional journey showcasing relationships, roller coaster ride of emotions with excitement and lowliness. Despite the less amount of content found in the film, the director has managed to embark with a decent film, which can be at least one time watch movie for the audience. Hence though technically it may lag behind in many ways yet can be a good Sunday watch with family and friends. So, the film doesn’t really deserve a better rating.
Rating – 3.0