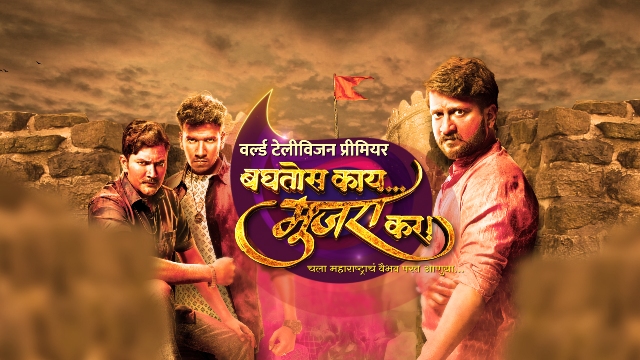 Sony Marathi Channel is presenting World Television Premiere of Jitendra Joshi’s Marathi film ‘Baghtos Kay… Mujra Kar!’ who is also anchoring the show ‘Garja Maharashtra’ where he will be praising the Glory of Maharashtra.

On this 14th October you can watch the story of three soldiers of Chhatrapati Shivaji Maharaj; Nansaheb, Pandurang, and Shivraj who are from Kharbujewadi in World Television Premiere on Sony Marathi. It will be honored of the film if half of the budget of building Shivaji Maharaj’s monument goes for conserving, His forts which will also rejuvenate the glory of Maharashtra says, Director of the film Hemant Dhome.

Jitendra Joshi who is Praising King Shivaji Maharaj in this film is telling great stories of Maharashtra in the show ‘Garja Maharashtra’ on Sony Marathi. Until now you must have heard stories of saint Dnyaneshwar, Saint Tukaram, Chhatrapati Shivaji Maharaj, Bajiprabhu Deshpande, and Mahatma Phule. Now in upcoming parts, there will be stories of Gopal Ganesh Agarkar, Dr. Rakhumabai Raut and many more Great legends of Maharashtra.

So keep watching ‘Garja Maharashtra’ show along with World Television Premier ‘Baghtoy kay Mujra Kar!’ with many different shades of Jitu only on Sony Marathi channel.