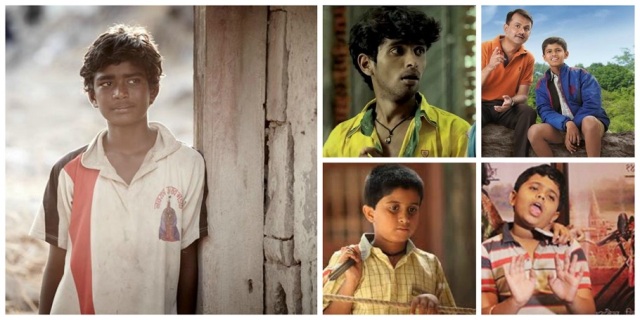 The multiple award winning film would not have been so marvelous and impactful without the presence of this child actor who got special mention in almost all the film festivals wherein the film was featured.

The story of two poor kids pawning their most beloved cycle, Elizabeth, to help their mother with money. This adorable story is a treat to watch.

The innocence of teenage and the temptations of the world is well portrayed by the child actors in award winning film Shala.

An eye opener, this film is all the more enjoyable thanks to its talented starcast. Kudos to these kids who threw awkwardness to the wind to essay their roles.

It is a story that will never go into oblivion. Fandry is simply outstanding in its portrayal of the suppressed cast. But the credit for its realism cannot be taken away from the lead actor Somnath Avaghade. Appreciation was showered on him for his role of Jabya in the film.

In a film that required best chemistry between grandfather and grandson, Nishant Bhavsar played the role of Govind in Vitti Dandu. The film is touching as well as realistic thanks to brilliant performances.

The story that won hearts and brought to everyone’s eyes is unforgettable. Shwas that entered Oscars was beyond a layman’s imagination. Ashwin Chitale’s acting simply made the story more real.

Although Parna Pethe played the matured character, credit cannot be taken away from the bubbly yet talented Shruti Kalsekar who beautifully portrayed the childhood of Ramabai.

A super entertineer , this film stole hearts of both children and grown ups alike. Mihiresh Joshi scores highly thanks to his brilliant acting skills.

Akshaya Deodhar is the adorable teacher in Tujhyat Jeev Rangla