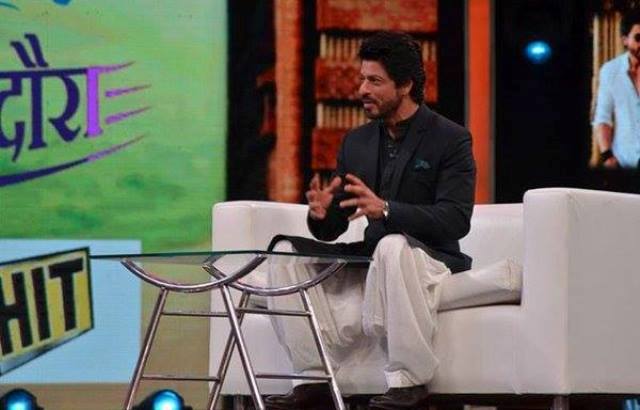 Shah Rukh Khan is busy man these days with his movie promotion called Fan. The movie is directed by Maneesh Sharma having Shah Rukh Khan in the dual role. He is leaving no chance to promote his film in any media and his visit to a popular comedy show at one of the leading Marathi channels called Chala Hawa Yeu Dya vouch for this. He for his film promotion has gone with a Marathi Manus Avatar. Shah Rukh Khan was seen joining show in Marathi attires and graced the artists working for the show along with the audience surrounding the same.

As per reports, King Khan was seen dancing, playing violin and having good time in the show while sporting the Marathi Manoos avatar. This is the first time when Shah Rukh Khan has headed to any Marathi Channel for his film promotion, however, talking about this show Chala Hawa Yeu Dya, it was also visited by John Abraham and his team for promoting the recently released film called Rocky Handsome. So, it is not new for the show to have B Town stars in CHYD, though it can be a big news for the show to have Shah Rukh Khan on their show.