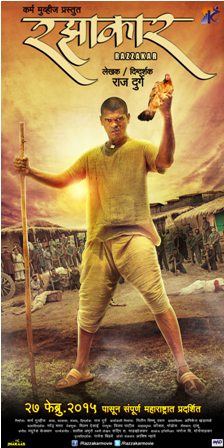 Razakar, the upcoming Marathi movie has been presented by Karrm Movies and the teaser that has been released has won raving reviews from the Marathi cine goers. Raj Durge is its director. The movie stars Siddharth Jadhav, Zakhir Hussain, Jyoti Subhash in the lead role. The movie is all about fighting against terrorism. This movie according to its producers is to be released this 27th February, 2015 much to the delight of the anticipating fans.

After ‘Lokmanya Ek Yugpurush’ that gave brief account on pre-independence struggle in India spearheaded by Lokmanya Tilak, another film in the Marathi regional language is all set to showcase the brutal occurrence of the Razzakars, who are said to be a private militia of Hyderabad region, who are said to have resisted Hyderabad state’s integration to Independent India. Not every Indian knows as to how they were placed on hold. However, this new movie is ready to throw light on the important part of post independent Indian history.

In the team’s presence, the film’s first look had been launched to media with great fanfare. The lead role is being played by Siddharth Jadhav as Hari in the movie, which portrays a completely different role. Rather, it can be termed to be a story about a common village lad, who turns into a freedom fighter, with Hyderabad Mukti Sangram as the background. Zakhir Hussain plays the negative character and role of the mother has been enacted superbly by Jyoti Subhash.

Being directed and written by Raj Durge, this movie is expected by the entire team to be a complete blockbuster. The producer of the movie is Satish Pillangwad, while Anikhet Khandagle is its DIP (Director of Photography). Narender Bhagat is the Art director, Kushal Moses the action director, Meena Desai looking after costumes and Vijay Patil the make-up section.