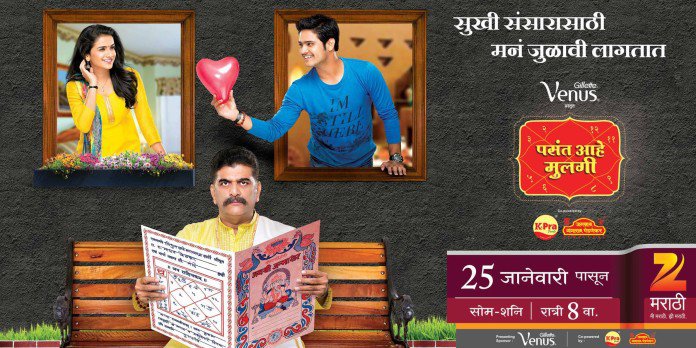 Pasant Ahe Mulgi is among a popular Marathi TV Show of Zee Marathi Channel. The TV series is telecasted for six days (Monday to Saturday) at 8.00 pm onwards. The daily soap is directed by RajuSawant, while produced by NitinVaidya and NinadVaidya under the banner of Dashami Creations. The main characters of the TV series go like this ReshamPrashantas Urmi, AbhishekDeshmukh as vasu (Punarvasu) and Dr. Girish Oak as Pant (Father of Vasu) and ReshamPrashant as Urmi, while the other actors like, MeghnaVaidya, Padmanabh Bind, KetakiSaraf, NamrataKadam, Rama Joshi, Vijay Mishra and Siddhirupa Karmarkar in the supporting roles.

Pasant Ahe Mulgi is all about an outgoing girl called Urmi and the sweet but mischievous boy called Vasu. The two are married who seem to be a match made in heavens but end up facing loads of mess with their families coming face to face to them. The father of Vasu is a man with strong religious beliefs while Urmi’s family happens to be a typical middle class family with modern day thoughts. So, will the two families of such a huge contrast mindsets would come together. So, will Vasu family will ever like Urmi and how their match of different minds and culture will be able to settle down things. Perhaps you must be catching up the TV serials and enjoying the difference a lot.