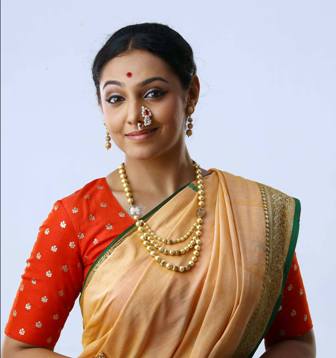 Nupur Daithankar is a known actress who is particularly active in Marathi TV shows and serials. She hails from Pune wherein she was born and brought up at. She did her schooling from Pune while for her graduation she went on to pursue her Bachelors of Arts from the known college Fergusson College from Pune. She then headed to Mumbai to complete her master’s in Performing Arts from Mumbai University. Since she has been passionate about the dance, she also has developed a dance institute at Pune and Mumbai wherein she helps the youngsters to learn different classical dance. She went on to Nalanda University to learn different forms of dance under the guidance of the competent master Guru Padmabhushan Dr.Smt  Kanak  Rele.
Besides, dance, she also loves acting and has been playing different characters in small screen. She played the role of ‘Heera’ in Zee Marathi’s TV show called ‘Baji’. She played the key role in it while the show was made in her own city of Pune having the story of 1770 thus was a period drama.  The young lady is also the recipient of a National Scholarship, which is given under the Ministry of Culture, Government of India and has also got the awards like ‘Nrityaratna’, ‘Aikelavya Award’, and ‘Tarang Padma’ to name a few. She has been trained as a dancer since her childhood and has aspired to be an actor and dancer.
Her dance has taken her to faraway places including both India and abroad for her cultural programs and fest. Besides an ace dancer she is also a choreographer and she is often seen playing around cultures, rustic aroma and vivid chatter.  Some of her choreographies include Nishabda, and Moksha, while most of her dance performances and choreographies have made the audience go crazy about her skills and knowledge about the dance she has. Besides running the institute, she is also a certified examiner for the dance exams, which are conducted by the groups like Akhil Bharatiya Gandharva Mahavidyalaya, and Miraj and also the faculty member of Bharati Vidyapeeth, Pune. She is single and not ready to mingle with anyone as she is focusing her career.
Share