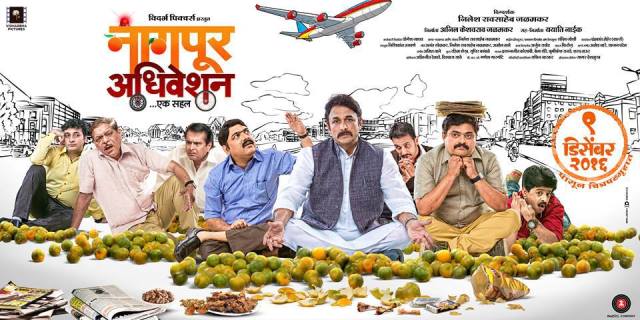 Sarcasm never goes out of fashion and neither does black humor. The makers of the film, Nagpur Adhiveshan has used these two tools very effectively to bring out the complex state of politics in Maharashtra. The state assembly of Maharashtra takes place in the city of Nagpur. The orange city of Nagpur is also known as the winter capital of Maharashtra state. The film with veteran actors namely Aniket Deo, Makarand Anaspure, Mohan Joshi, bharat Ganeshpure has an interesting script that is high on humor and sarcasm. The carelessness of the politicians and the plight of the common man are depicted with characters that are real and convincing.

The Plot: Anshul is a peon who is recently transferred to the city of Nagpur. He feels alienated in the city and tries hard to adjust with the culture and food of the place. And yes it is quite hot in Nagpur. So he tries to approach the authorities to give him a transfer so that he escapes from the place to his comfort zone. What happens when he brings up this issue in the assembly? Does the politicians take it seriously? Yes they do! Exactly the issue is discussed and examined with all it’s triviality. Which means the makers have actually hinted on the fact that the political scenario consists of trivial discussions and total frivolity whereas the common man suffers massively with other major issues. It is an apt satire that is powerful and impactful. Yet, the makers have promoted this film as a sheer comedy, without any message. So we think Nagpur Adhiveshan is pure entertainment. But indeed, there are points to ponder.

Analysis: The script has more than one plot. The theme was to bring together many characters and links that find way to the Nagpur assembly to create the whole drama. There are clear punches which evoke laughter and loads of hilarious situations are imbibed in the script. The positive thing is the mature treatment of the subject and the senior actors handling their parts adeptly. There is an overall unity and cohesiveness to the story that binds all the sub plots together. At the same time, presence of too many characters give a muddles appearance to the story. It is difficult to decide who is the protagonist.

Performances : Most of the actors we see in Nagpur Adhiveshan are seasoned and apt for the roles. They are experienced and pull off their parts with their distinct penache. Ajinkya deo is powerful and convincing. While Bharat Ganeshpure tickles your funny bone with his infallible comic timing. Makarand Anaspure creates light comic moments with his realistic acting. Sankarshan Karhade nails his performance as the boy who tries to adjust in Nagpur coming from Mumbai. Mohan Joshi also leaves no stone unturned to bring out a powerful yet poised performance.

Direction: Nilesh Raosaheb Jalamkar has brought out the intricacies of the script vividly. While he falls short of skills in drama scenes, he is adept at handling comic scenes. He has dealt with the characters nicely bringing in real drama and sequences that all will relate to. Locales and landmarks of Nagpur have been aptly captured in the camera.

The Last Verdict: If you like political satires and are fond of comedy, then Nagpur Adhiveshan will entertain you. With mature actors, it is film for the mature audience yet youngsters too can enjoy it.