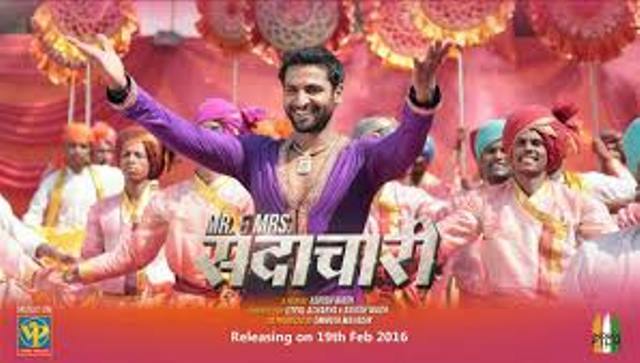 This Friday was a busy one considering the fact that too many films released not just in B Town but also in M Town. This include the Marathi film called Mr & Mrs. Sadachari starring Vaibhav Tatwawdi, Prarthana Behere and Mohan Joshi in the lead roles, while Uma Sardeshmukh, Sumukhi Pendse, Prasad Javade, Uday Nene and Vijay Andalkar in the supporting roles. The film is produced by Utpal Acharya under the banner of Indian Films Studio, while the film is directed by Ashish Wagh. The film is an action love story, which has the photography from Balajee Rangha. Now, let’s dig in deep into this Marathi film to get the gist of the movie as under:

A rowdy collegian with golden heart is seen falling in love with innocent and sweet young girl, however, their love has thorns on its way. So, amidst their love story when they are pursuing their relationship in public, they try hard to overcome them. So, whether they overcome this issue or not is a big question, which can be answered only when you catch the film.

The film is a remake of a south Indian film called Mr and Mrs Ramachari. As the film is an action packed love story, one can expect to see the lead actors or lover come together at the end unlike seen in any other love stories.  However, this is not the case with this film, as they are seen ending up their relationship. But with this film is pitted with some flaws, as things are simply forced and trivial for the same. Though there is no doubt to the fact that the film has great moments while the actor being the ardent follower of Shivaji Maharaj seems to have done a decent role, but it fails to strike the right chord. The fact is the film is stretched too hard life a chewing gum hampering the taste of the film.

Tatawadi can be called as a good actor and he has tried hard to succeed in order to shed his chocolate boy image here. On the other side, you can find Behare adding up the glam quotient of the film. And don’t forget the performance of Mohan Joshi who has been seen with witty one liners and interactions with lead actor onscreen make some of the best scenes of the film.  The young actors of the film like Prasad, Anuja and Uday seemed confident their respective character and sadly Vijay Andalkar seemed to be a big waste in the film as his work was portrayed more like a typical villain of seventies in B Town films who is seen playing hide and seek in the film.

The music for the film seems to be okay, and the songs are shot at some of the best locations of Mauritius with decent cinematography. The dialogues were drafted in a decent fashion suiting the taste of Marathi audience. However, the film seemed to have certain predictable scenes, which becomes annoying to catch with. The technical elements like screenplay, editing and other stuff remained okay, which increased the entertainment value of the film.

The film seemed to have made for masses, which seemed to have wreaked havoc for its content and other elements, which failed to add any value in it. The film has covered a number of elements including, action, love, drama, emotions and other elements, which seemed to have wrecked things thus weakening the entertainment value of the film to some extent. All in all, the film somewhere gave a gesture of a south Indian films considering the roller coaster action scenes and flip flop emotions that transpired among the lead roles of the film. Rating therefore would hamper for the film.