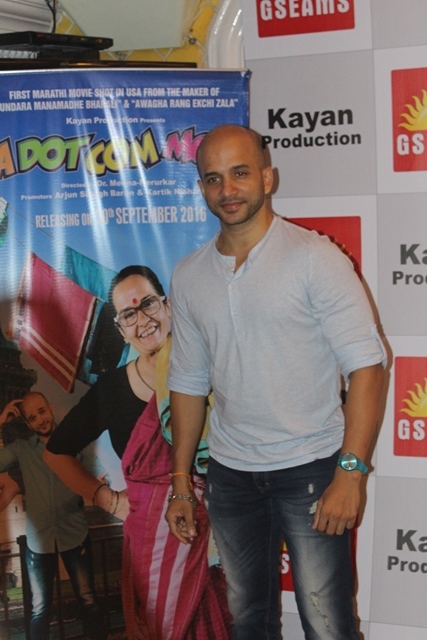 God could not be everywhere so he created Mothers. A mother’s soul is pure and full of love and she selflessly does everything for her children. Such a similar story of a simple and innocent mother can be seen in the movie ‘A Dot Com Mom’. Dr. Meena Nerurkar who has clearly made a mark in the theatre industry is making a debut as a Director in the movie ‘A Dot Com Mom’. This mother goes to the foreign country because of her son’s constant insistence and what happens when the mother moves to America and has a difficult time is shown in a humorous way in this movie. We can see how this mother tries to tackle situation wherein on one side her modern daughter in law and on another side the burden of her son’s expectations.

Recently released trailer shows how the mother scurries between her son and her daughter in law. This is the first ever Marathi Cinema to be shot in America, in which the journey from an Indian mother to an American Mom is portrayed in a hilarious manner. A Dot Com Mom is produced by Dr. Mina Nerurkar who has given the Marathi audience popular plays like ‘Sundara Manamadhe Bharli’ and ‘Avgha Rang Ekachi Jhala’. For many years she has been writing for the Sunday issue of Saamna newspaper as well as for the Lokprabha magazine and she has written books like Dhanya ti Gynaec kala‘’ and ‘Thase Mansanche’.

Along with the Production of the movie, Dr. Mina Nerurkar has also taken the responsibility of Dialogue writing, Lyrics, Choreography and Direction. Sunil Jadhav is the editor of the movie and the Cinematography is handled by Vinayak Radhakrishna and Haider Bilgrami. Along with music legends like Sudhir Phadke, Ashok Patki and N. Datta, Neel Nadkarni and Prateek Shah have given their contribution in the music direction for the movie. The lyrics penned by Jagdish Khebudkar, Dr. Mina Nerurkar and Neel Nadkarni are sung by Devaki Pandit, Neel Nadkarni, Nida, Neelaja Ankrom. The movie is produced under the Kayan Productions banner and the presenters are Arjun Singh Baran and Kartik Nishandar of GSEASM. This movie is releasing on this coming September 30th all over Maharashtra.