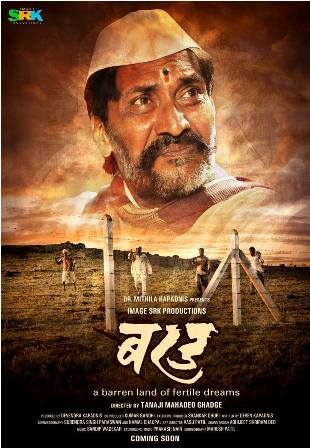 Barad is an upcoming Marathi movie that is anticipated to be released this March 2015. The producers of the movie are yet to finalize the actual release dates, which is expected to be done in the coming few days. Barrad is termed to be barren land full of fertile dreams and is much awaited by the Marathi movie cine goers who are really impressed by the first look of the poster that was launched very recently.

This movie has been produced by the well known producer Devendra Kapadnis and directed by Tanaji Mahadeo Ghagde. The banner under which the movie is being produced is Dream Merchant Studio that is said to have been associated with Bollywood movies for a long time and coming up several hit movies to its credit. The leading star cast of the movie includes Suhas Palshikar, Shahaji Kale, Ranjan Patil, Bharat Ganeshpure, Nandkishor Chaughule and Sanjay Kulkarni.

The screenplay and story was written by Deven Kapadnis himself and music was composed by Sandip Wadekar. Choreography of the movie was done by Mahesh Patil and the trailers show the dance sequences to be above average and to make the viewers to enjoy every movement of their favorite stars. Cinematography is done by Kamal Chaupal and Surendra Singh Paraswan. Art Director of the movie is Vasu Patil. Abhijit Shriram Deo has taken care of the sound design and background music was given by Prakash Nair. This movie is slated to be of drama genre and is expected to touch the hearts of the viewers.

The entire team has worked very hard for creating this movie and anticipates to appreciated and applauded by the audience. According to the director, this movie is likely to generate more appreciation and praises from both the audience and the critics as well.