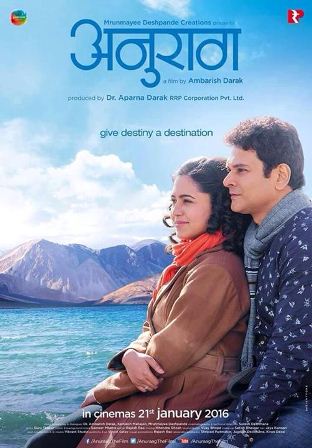 There are loads of Marathi movies, which seems coming these days for the Marathi audience. If you talk about 2016, one of the awaited Marathi movies includes Anurag. The lead actors of the film include Dharmendra Gohil and Mrinmayee Deshpande, which is directed by Dr Ambrish Darak and produced by Mrunmayee Deshpande in association with RRP Corporations Pvt. Ltd. The film is releasing on 21st January 2016, which was produced amidst the serene atmosphere of Leh Laddakh the heaven on earth. The man behind the camera work is Suresh Deshamane, who has an exposure of 25 years of shooting films.

The film is basically an emotional drama, which revolves around a couple and their emotional journey. The film has limited characters in it as the focus of the movie is the lead actors of the film. The lyrics of the film are given by Guru Thakur, while the music is given by Sameer Mhatre. Thus you would find all the shades of emotions, which are witnessed in any relationship of love and romance. The film has beautifully showcased the way the relationship passes and how things turn pale in it giving all the reasons and opportunities to have some rejuvenation in it. So, you have love, no love and re-birth of love in the film.