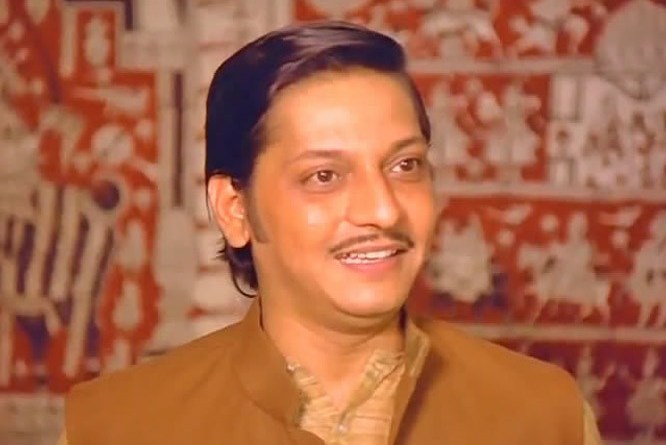 Mr KAMALAKAR PALEKAR was his father who worked in the general post office and Mr SUHASINI PALEKAR was his mother who was working in a private company. He was raised with his three sister named NEELON, REKHA AND UNNATI. Then after he married SANDHYA GOKHLE after his divorce from 1st wife. He has improved the shape of the Marathi cine industry as director and producer. People loved to work with this special person as he was kind hearted and his behaviour was very humble to all catagories of people.

He himself started his career by studying fine arts at the college named SIR JJ SCHOOL OF ARTS, Mumbai, and then pursued his artistic career as a painter. Being a painter he participated in many shows and competition. Then he did many of his act in the AVANT grade theatre in INDIA. AMOL PALEKAR was active in HINDI and Marathi movies since 1967. He has acted as a lead role in many of the HINDI and Marathi movies. AMOL PALEKAR gave his first performance in1971 in the movie “SHANTATA” court “CHALU AHE” which was directed by SATYADEV DUBEY. Then after he acted as a cast role as an actor in the movie which was directed by BASU CHATTERJEE in “RAJNIGANDHA” and after that it was a low budget hit movie. This acting skill led him to many other roles like “middle class” comedies and basically alternative. This movies was mostly directed by Chatterjee ar HRISHIKESH MUKHERJEE” and then after he acted in many movies like “GOLMAAL” “NARAM GARAM”, and then after he won the FILMFARE best actor for GOL MAAL”. So after he married to a sixteen-year-old SRIDEVI in the movie “SOLVA SAAWAN”. His another achievement was to act as a intellectually disabled man a character played by kamala hasan in the TAMIL MOVIE.

After that he played a role of RAVI in the Malayalam movie OLANGAL. Then he directed the Marathi movies such as” THODA SA ROOMANI HO JAYE” AND “PAHELI” . Among these two movies, the 1 st movie “THODA SA ROOMANI HO JAYE “ has become a part of management studies as it was related to the part of human behaviour. PEHELI was indias official entry for best foreign film at the 2006 OSCARS.

As a director he has got many awards and directed many movies in his career. Some of them are

movie “DHOOSAR” in the year 2011. He got the best actor award in 1977 and in 1980 for the movie “CHOTI SI BAAT” AND “ GOL MAAL” respectively. Then after again he got the award in 1981 for the movie “AKRIET”. These are the noticeable creation of Amol PALEKAR.