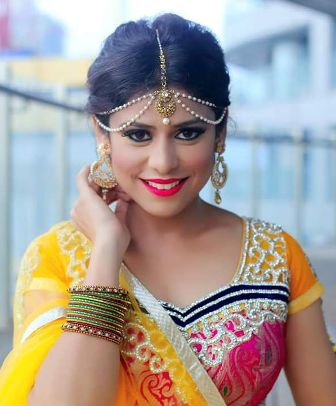 Ashvini Mahangade is a Marathi TV actress who is also seen in M Town films at times. She hails from Wai, Satara district, while was born on 27th October 1988. She did her schooling from Shree Bhairavnath Vidyalaya, Pasarni and went to the college – KisanVeer Mahavidyalaya, Wai for completing his graduation completing his B.Com along with the Advance diploma in Hotel Management. Talking about her parents, her father’s name is Pradipkumar Sadashiv Mahangade and her mother’s name is Vidyaa Pradipkumar Mahangade. Her height is 5’4″ and her color of eye is brown and hair is black, while her vital stats of her body include 34-28-30.

She started to get her first break with the play called ‘Aadhi Basu Mag Bolu’ which was directed by Chandrakant Kulkarni. Talking about the TV show it started with Asmita aired on Zee Marathi, while in M Town film, she did her debut with the movie called Tapaal, which was directed by Laxman Utekar. Her favorite actors in B Town include Nana Patekar, Akshay Kumar, and Nawazuddin Siddiqui, while her favorite actress includes Vidya Balan and Veena Jamkar.  She likes her Mom’s food particularly the Masale-Bhaat and the Butter Chicken, which is made by aunty.

Some of her Marathi Films include Boyz (2017), which was Dir. by Vishal Devrukhkar, Tapaal Directed by Laxman Utekar and Anudaan Directed by Vikaram Chavhan. Talking about the TV shows, she has a long list of TV shows that include Swarajya Rakshak Sambhaji (Zee Marathi), Asmita (Zee Marathi), Bha Se Bhadye (Zee TV), Madhuri Middle Class (Star Pravah), Zep (as Anchor) (aired at Star Pravah), Bheti Laglyaa Jiva, Kalpataru, Lakshya, Brhamandanayak, and Savar Re. Some of the professional plays include Aadhi Basu Mag Bolu, Maharashtrache Changbhale, and Golpitha. She also acted in a monologue called Nashibvan Baiche Don. Talking about her personal life, she is still to get married and is not even dating anyone.